Announcement: Access the latest SOA updates on COVID-19 at SOA.org/covid-19.

Due to unusually high email volume in Customer Service, you may experience a longer response time than usual. We apologize for any inconvenience this may cause.

From Massage Therapist to Actuary 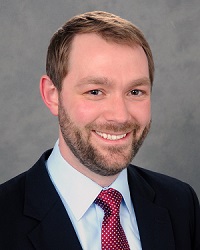 If there is such a thing as a “traditional” route to an actuarial career, Ehren Nagel certainly didn’t follow it.

After being homeschooled until age 15, he went to community college in his home state of Washington and graduated with a two-year degree when he was 18.

Nagel still didn’t have a career in mind, so after graduation he got on a plane and flew to Switzerland.

“I still had no idea what I wanted to do with my life at that point,” he said. “I wanted to do some travelling and experience more of the world.”

Nagel’s two-year stay in Switzerland and Austria included stints managing his girlfriend’s modern dance company and working as a cashier in a grocery store.

After returning to the U.S. in 2001, Nagel decided to enroll in a massage therapy school. He became licensed in Indiana and North Carolina and started his own business, working primarily with hospital employees and a rheumatologist to help manage stress and chronic pain.

Four years later, he was beginning to think about a change.

“I had gotten to a point where it was physically taxing as a career, and it was no longer intellectually stimulating, because a lot of what I would do was treat the same diagnosis over and over again,” he explains. “There wasn’t a lot that was really challenging as far as something I hadn’t seen before.”

Nagel thought about growing the practice and focusing on the business side. He also considered a switch to physical therapy. But in the end, he decided to go back to school for a math degree, with plans to become a teacher.

“It wasn’t until the summer before the last semester of my senior year that I started saying, ‘how can I use a math degree outside of teaching?’” he recalls.

Nagel found the beanactuary.org website and thought his background fit into the idea of “the new actuary”—someone with people skills as well as technical and financial savvy, who is able to communicate to a broader audience.

Nagel studied for Exam P during his summer internship, passed on his first attempt, and landed his first job after just one interview.

Seven years later, Nagel is a life product development team lead at Lincoln Financial Group, and sharing his story with other career changers.

“I really do believe it’s possible,” he said of switching to an actuarial career from an unrelated field. “I’ve seen teachers and musicians do it. It’s not an easy transition, but you shouldn’t be dissuaded by what you’ve done before.”

Nagel, who now finds himself interviewing entry-level candidates, believes that career changers can use their previous experience to their advantage when looking for jobs.

Nagel said he advocates the use of the “STAR method” (which stands for situation, task, action, result) when preparing for interviews.

“Take a few stories about things you’ve done career-wise or volunteering, and break them down briefly into what was the situation, what was the task you needed to complete, what actions you took, and what was the ultimate result,” Nagel explains. “Preparing ahead of time for an interview using this method can be very effective because, when you’re on the spot, it helps you remember how to explain to an interviewer how prior experience and skills will translate into a new actuarial career.”

“A prerequisite that all companies are looking for is candidates that have a basic understanding of what’s involved with an actuarial career and an interest that goes beyond, ‘I hear this is a great career and you can make a lot of money.’”

Doing plenty of research about the company that is interviewing you is another important way to show your commitment. “Read their annual investment report. What are their strategic goals? Show an interest in the big picture for their business,” he points out.

While previous experience does have its benefits, Nagel cautions career changers not to assume they will advance more quickly within a company than someone straight out of college.

“I’m a little older and have broader experience, and that’s served me well,” Nagel said. “But you need to be humble and realize you’re starting a new profession. More than 50 percent of it is the experience you have on the job.”

Ultimately, when deciding to make a change and pursue actuarial work, Nagel says each individual needs to decide whether they’re prepared to commit to years of exams and starting at an entry-level position.

“To me, it’s worth it, and it’s worth the rewards associated with it,” he concludes.

Ehren Nagel, FSA, MAAA achieved his FSA in December 2014 and is currently a life product development team lead at Lincoln Financial Group in Greensboro, NC. He can be reached at ehrennagel@gmail.com .

Avi Saper is an actuarial math and statistics major at the University of Manitoba. He passed the first two SOA exams in 2014, and will be interning with the Wawanesa Mutual Insurance Company this summer. He is a member of the SOA’s Candidate Connect Advisory Group and can be reached at avisaper@gmail.com.