By Suzanne Bates and Scott Weighart

As every actuarial leader knows, there is an X factor in leadership that is hard to define but essential to success. Leaders who analyze financial risk must not only be skilled in mathematics and statistics, but also must be able to earn trust, inspire, and touch hearts and minds. To give an example, let’s consider this disguised scenario:

Mark, the CEO of a company we’ll call ICON, wondered whether the financial officer of one of ICON’s units had that X factor that would allow her to lead a key strategic initiative labeled “Logistical Systems Advisors” (LSA).

The board of directors and the executive team had decided to grow LSA through acquisitions. Tam, the financial officer assigned to the project, had delivered results, but her style chafed some. Smart, focused and driven, Tam’s style helped to make some improvement in product performance and client responsiveness. However, Mark considered Tam’s style might not be collaborative and inclusive enough to increase the chances of success.

Failing to find leaders with the right stuff and not being able to place them in the right roles have serious consequences. A significant body of management research reveals that:

The “X Factor” in Leadership
Mark was not alone in his struggle to determine whether Tam was capable to take on a new challenge. When it comes to executive presence, you often hear leaders say, “I know it when I see it.” But when people talk about the topic, it is difficult to describe exactly what “it” is, and often people focus on superficial elements, such as attire and speech.

We have developed a multidimensional model for Executive Presence (EP) that goes beyond simplistic explanations. There are three components to EP: Character, Substance and Style. This model enabled us to build the first research-based, scientifically validated assessment tool to measure executive presence and influence; the Bates ExPI™ or Executive Presence Index.

Armed with this tool, we can identify a leader’s strengths and developmental needs, while providing actionable feedback. We can also compare the leader’s own perceptions to those of others. The behavior of leaders influences, and is influenced by, social organizations. We know that it is not just important that these qualities exist; they must be seen and appreciated by others.

The model defines 15 facets of behavior—the qualities of leadership that make up executive presence.

In a pilot program of the ExPI with 100 leaders of 20 companies, the model enabled us to share a rich, nuanced view of each leader’s presence. Through discussions of the leaders’ business situation we helped them identify themes they had seldom considered—themes that could be the key for future successes.

The Challenge-Development Curve
How does the model apply to situations like the one Mark faced? We know that there are inflection points or triggers that prompt leaders and organizations to think about executive presence and influence. The Challenge-Development Curve highlights the point where executives might anticipate feeling stuck and in search of solutions. Most leaders have a strong bias to what we call the “hard factors” of performance—practical skills such as strategy formulation, operational efficiencies, cost reduction, and so on. On the other hand, the “soft factors” of performance are grounded in less obvious dynamics of thought, feeling and action.

While most executives recognize intuitively that these soft factors are important, they are uncertain about how to measure their own capabilities, let alone how to create a developmental path. We know that when leaders pay attention to the aspects of presence and influence and take action, they become far more adaptable, especially in challenging situations.

We can see below that increasing levels of challenge stimulate a leader’s development up to a key inflection point. When we reach point ‘b’ below, we reach a fork in the road. The proper type of intervention—expert advice, stakeholder feedback, mentoring, etc.—produces “adaptive change.” Development continues, and the leader emerges more capable than ever in spite of, or even due to, that increased level of difficulty. 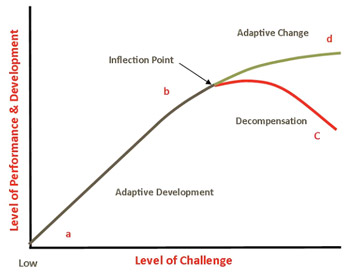 Without that intervention, however, the inflection point leads to regression. The leader may become frustrated, overwhelmed and depleted, performance suffers, and a developmental opportunity is missed. Bear in mind that an estimated 60 percent of Six Sigma improvement initiatives don't achieve the desired outcomes, often due to insufficient cooperation and teamwork; psychosocial factors.

Most leaders have observed avoidable failures that resulted from deficiencies in so-called soft skills.

The Case of Tam
This proved to be the case with Tam. Mark believed that Tam had the capability to meet the new challenge. He understood clearly the requirements of the new role and was aware of some of Tam’s “flat sides.” However, he didn’t understand how they come into play or how they could be managed. This is what intrigued him about the more scientific approach to executive presence in the ExPI. But would it work?

Mark talked to Tam. She acknowledged that there were areas in need of improvement. She liked the idea of cultivating the kind of executive presence that Mark had demonstrated time and again. And when she went through the ExPI assessment, she learned a great deal about how her colleagues perceive her. The ExPI provided her with a “snapshot” and a road map for personal development in new areas.

Here’s what the ExPI assessment revealed: In the Character dimension, no one questioned Tam’s authenticity or integrity, but many didn't appreciate her concern for others and her humility. As we explored the results further, we found that Tam favored those who responded well to her “take-no-prisoners” style, leaving others feeling less appreciated.

In the Substance dimension, Tam got the highest ratings in confidence, practical wisdom and vision. But here again, her intensity and focus resulted in a low resonance rating; resonance is all about connecting with others, becoming attuned to their thoughts, feelings, concerns and motivations.

In the Style dimension, Tam received strong ratings for showing up looking ready and eager for action (appearance) and for a disciplined approach to setting and sustaining direction (intentionality). She received low ratings in inclusiveness, which reflected her tendency to rely on and empower some but not others. Her scores in interactivity, represented in ExPI items like “Accessible, easy to connect with and talk to,” were also low.

Through feedback sessions and coaching, Tam took action. Working with a qualified coach, Tam proceeded to:
• Learn techniques that helped decrease her tendency to dominate discussions and discourage feedback from others.
• Adopt a more active listening style, practicing it to make it a more natural part of her conversations with stakeholders.
• Get advice from her coach on how to structure group and one-on-one meetings to promote constructive conflict and free expression of dissenting opinions.

Within three months, Tam began to receive positive feedback as she made progress in becoming a leader. In the end, Mark was pleased to see that his gut feeling about Tam had been vindicated; she could be so much more, and now she’s well on her way.

Final Thoughts
Every leader can improve their executive presence through coaching, mentoring, action learning, team development and leadership programs. It is possible to get leaders with the right stuff in the right roles, especially when you have a way to define and measure the factors of executive presence that contribute to success. The leader’s ability to take action drives change, increases engagement, and transforms your company. When you’re looking to unlock the X factor in leadership, the key is to understand the science behind solving for X.

As talented actuaries move into leadership roles and try to rise in the ranks, they often find that their technical skills are necessary but not sufficient to succeed. What makes you as a leader is not your actuarial knowledge but rather your ability to inspire above-and-beyond effort through communicative leadership. This requires being attuned to the actions and thoughts of others while being seen as a genuine and concerned leader who embraces dialogue.


Suzanne Bates is CEO and founder of Bates, a global coaching and consulting firm that helps leaders influence the world. She advises the CEOs and top executives of international companies on communicative leadership and executive presence. Suzanne is the author of the bestselling business books Speak Like a CEO, Motivate Like a CEO, and Discover Your CEO Brand (McGraw-Hill) and writes a popular leadership column, Thoughts for Tuesday ( www.bates-communications.com).

Scott Weighart is director of Learning and Development at Bates. Scott creates innovative tools and content to assist the firm’s clients as they work toward mastering powerful communication and leadership skills.