Chess has long been used to help students build reasoning and critical thinking skills. The Actuarial Foundation has sponsored programs to encourage actuaries as mentors using chess as an entree to teach math and analytical skills.

Chess is an activity that requires precise analysis, calculation of risk, formulation of strategic plans, and execution of tactical maneuvers. Chess is also a fairly universal sport, a social activity.

Therefore, it seemed a natural fit for the Technology and Investment Sections of the Society of Actuaries (SOA) to jointly sponsor the Thomas C. Barham III Speed Chess Tournament at the Life and Annuity Symposium in Toronto, Ontario, as a pre-meeting networking event.

Participants gathered on the Sunday afternoon prior to the meeting for the inaugural Thomas C. Barham III Speed Chess Tournament. The networking event was named for this prominent chess-playing member of the SOA. A tribute to Mr. Barham can be found on the SOA website. The networking event was an opportunity for members to make new acquaintances while enjoying fun and friendly competition, playing five rounds of 10-minute speed chess. Twelve actuaries from around the world participated. In addition, several spectators stopped in to observe the chess play.

The Annex Chess Club of Toronto facilitated the logistics of the tournament, providing equipment and directing the tournament. Local chess organizer Ted Winick and tournament directors Alex Ferreira and Shabnam Abbarin handled the pairings and recorded select games. Ted is owner of Spirit of Math, which is an after-school program for elementary-school-age students who are highly motivated, high-performing students. Ted also serves as the president of the Chess Institute of Canada and is devoted to establishing chess as a teaching tool for fundamental concepts such as pattern recognition, abstract thinking and problem solving.

Congratulations to Caleb Bousu, FSA, MAAA (senior staff actuary, Thrivent Financial for Lutherans, Minnesota), who finished first after five rounds with an unblemished 5-0 record. Second place went to Eduard Nunes, FSA, FCIA, MAAA, with a 4-1 score. Eduard’s only loss came at the hands of Caleb. The following is a recap of the game (in pgn format): 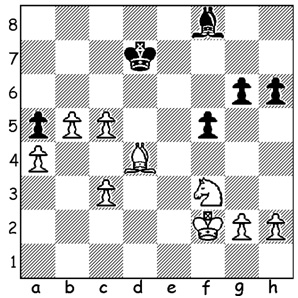 (The above diagrams the position after 34. Kf2 ..
Eduard is a piece and 2 pawns down in material and cannot stop the advance of Caleb’s passed pawns.)

The critical exchange occurred at move 23. b4 a5 24. Qb3 (pinning and winning the knight)
Eduard Nunes (Black)

Plans for the second speed chess networking tournament are underway. The event will be held on the Tuesday evening of the upcoming 2013 Annual Meeting in San Diego. All levels of chess players are encouraged to participate or stop by to observe. Ample time for networking will be provided between rounds.

Albert Moore is 2nd Vice President, Actuarial Systems, at Ohio National Financial Services. He volunteers his time teaching chess and encouraging an appreciation of math, primarily at the middle school level. He can be reached at ajmoore@alum.mit.edu.