It is with deep sadness that we announce the passing of our colleague and friend Emeritus Professor Marc Goovaerts, on Feb. 18, 2018 at age 71.

Marc was co-founder of Insurance: Mathematics and Economics, where he was the leading editor from the first issue in 1982 until last year. He was also one of the founders of Journal of Computational and Applied Mathematics in 1975.

Marc obtained his Ph.D. in Mathematics in 1971, with greatest distinction at Gent University. His impressive CV lists over 400 academic publications. He co-authored or edited more than 20 books and proceedings. His book Modern Actuarial Risk Theory, with co-authors Rob Kaas, Jan Dhaene and Michel Denuit, was also translated in Mandarin, Russian and Persian.

In 2008, Marc was awarded the title of Doctor Honoris Causa at Ankara University.

Until retiring in 2011, Marc was a professor at KU Leuven (Belgium) and part-time professor at the University of Amsterdam (The Netherlands).

With the passing of Marc, the actuarial research community loses one of the main contributors to actuarial science over the last few decades. 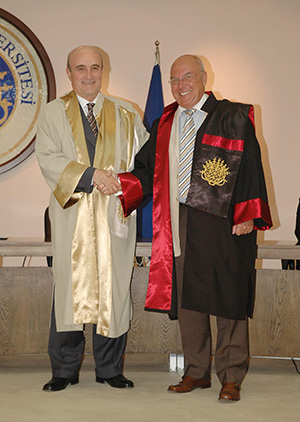 Prof.  Goovaerts was awarded the title of Doctor Honoris Causa at Ankara University Dr. Nusret Aras on May 6, 2008.