At its core, distribution is simply connecting a manufacturer’s product or service with the potential customers who might want or need that product or service. The distribution of financial services products, particularly those manufactured by insurance companies, has undergone a significant evolution. These products are now integrated throughout the financial services sector. Companies have a wide array of channels to choose from to gain market access or for market expansion as they determine the most efficient and effective paths to profitable growth.

LIMRA has been studying distribution channels and tracking industry results by channel for decades. In recent years, not only has retail financial services distribution continued to evolve, but also changes in consumer product distribution (i.e., industries outside of financial services) are accelerating. This is primarily a result of modern technology that empowers today’s consumers and creates new ways for them to interact within the marketplace. As such, organizations must be able to deliver a consistent consumer experience across face-to-face, contact center, web, and mobile channels. This omnichannel approach is well established in consumer products and is fast becoming relevant for financial services. Consumers look for and expect the same experience when shopping for financial services products as they do when shopping for other products.

This article provides a framework for understanding retail financial services distribution in the United States, including terminology that is relevant and consistent across all industries, not just financial services.

The Anatomy of Distribution

As with beauty, distribution channels are in the eye of the beholder. Consider the following examples. The financial professional (FP) engaging the consumer is the same in all cases.

So, in which channel is this FP? Obviously he has his state life insurance license, and has passed at least two FINRA exams; one to sell securities and another to be an investment advisor. He also has multiple relationships that include, but may not be limited to an IBD, an RIA (which may be part of the IBD), and a BGA. So, is he an independent insurance agent or broker? Is he an “IBD rep”? Or is he an investment advisory representative (IAR)/RIA? From a manufacturer’s perspective, the answer is probably yes to one of these, depending on which of their products he sells1. However, it is unlikely that the FP even thinks of himself as being part of any channel. He may simply call himself a financial advisor or some other title that reflects how he positions his practice. As such, his clients know him as a financial advisor (or some other professional) and may not even be aware of the BGA, the IBD, or the RIA.

Technically, a distribution channel describes the entire path from manufacturer to consumer. This article defines channel from the perspective of the manufacturer, while recognizing that advisors can end up in multiple channels depending on what products they work with and through whom they place the business. The remainder of the article introduces the distribution channel framework, which includes four dimensions:

In financial services distribution we’ve seen the growth and evolution of distributors that may not fit neatly into the categories presented in this article. Like all models, this framework is imperfect and there are likely exceptions to every rule presented.

As mentioned earlier, this article aims to introduce to the insurance and financial services industry a lexicon of terminology that is consistent with the broader world of retail distribution. The first term to define is the word direct. In financial services, direct often means direct response. Outside the industry, direct distribution channels are those where manufacturers interact directly with the individuals who might purchase their product; they have direct access to them. Thus, direct channels include not only what is traditionally considered direct response but also direct sales forces. If the manufacturer/supplier doesn’t direct the channel and sells through someone else, then it is using intermediaries (third parties). There may be one or more intermediaries (tiers) involved in a channel or a particular sale (Figure 2). The examples above are all two-tier intermediaries, with the BGA, IBD, or RIA being the first tier, and the FP and his firm being the second or final tier that interacts with the end consumer. If, in a fourth example, the FP sold a fixed annuity and submitted the application directly with the insurance company then he and his firm would be the sole intermediary (i.e., a one-tier structure). 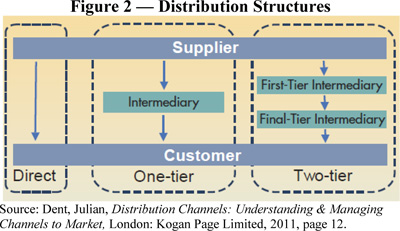 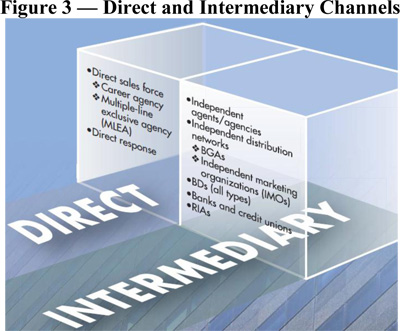 The second way to distinguish financial services distribution channels is by the employment relationship of FPs to the distributor. No hard and fast rules exist concerning the employment status of FPs in any given distribution channel. For instance, FPs in direct sales force channels are most often statutory employees, but they could be common-law employees or independent contractors. Regardless of the actual employment status of these affiliated FPs, the perception is that the FPs “work for” a particular distributor, which has to recruit, train, and house FPs and hope to make them productive and loyal.

While virtually everybody is an employee of some organization (or self-employed), FPs in independent channels who work for a local, very limited geographic organization (such as a local planning firm, insurance agency, etc.) are still considered independent. The definition of “independent” can cause confusion as other conflicting perspectives exist. Some consider a firm to be independent if it is not owned by or affiliated with another firm, and many firms claim independence by the fact that they offer no proprietary products. As such, I tend to agree with the most common definition of independent as is generally applied to IBDs. They are considered independent by virtue of the fact that the FPs are not employees of the BD, whereas FPs in wirehouses, regional BDs, and banks generally are. In Figure 4, affiliated direct sales forces are examples of zero-tier structures, affiliated intermediaries are one-tier structures, and, with the exception of independent insurance agencies working directly with carriers (one-tier), independent intermediaries are two-tier structures.

It is important to note that these categorizations are not black and white and that there are exceptions to every rule. For example, while career agents are an affiliated direct sales force of insurance companies as manufacturers, they also distribute products of other manufacturers, both insurance and investments; one company’s career agent is another company’s insurance broker. Similarly, while BDs and banks largely sell investment and insurance products that they did not manufacture, many of these organizations also offer their own products and services. BDs can be especially challenging to categorize. Attributes such as advisor-firm employment relationship, geographic footprint, and office (or business) model all contribute to how a BD is defined.

Some distribution channels tend to be associated with insurance and others with investments. This is due to the history of each channel, the regulatory constraints placed on them, and what they originally sold. In recent decades we’ve seen investment channels increasingly sell a broader mix of products, including insurance, and vice versa.

Figure 5 below completes the face-to-face framework, including the three dimensions of direct vs. intermediary, employment relationships, and insurance vs. investments. It does not form a perfect cube since logically there cannot be channels that are directed by the manufacturer that are simultaneously independent. 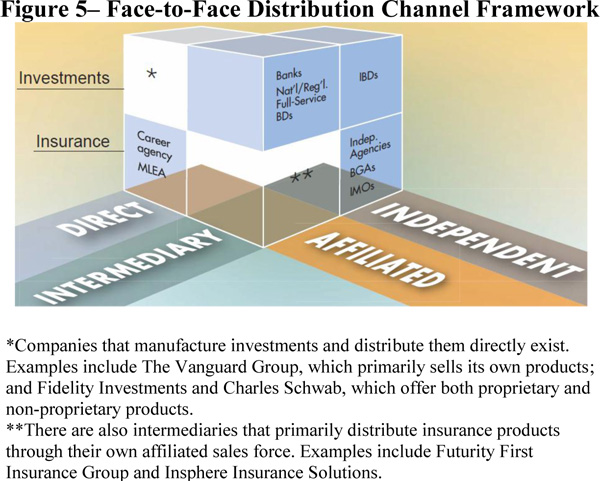 The final dimension in the distribution channel framework is distribution method (Figure 6). Here I am referring to how the manufacturer, distributor, or FP engages clients and potential clients. As mentioned earlier, today’s customers now leverage multiple outlets as they research and buy products and services. As such, organizations must be able to deliver a consistent consumer experience across face-to-face, contact center, web, and mobile channels.

Historically, direct response methods were limited to mail and phone via contact centers; the customer was purchasing directly from the company without the use of an FP (in the traditional sense). However, FPs are increasingly using mail, phone and even the Internet to interact with clients. The use of different distribution methods is a growing trend, particularly among younger advisors who are comfortable with technology, not only for business but also in their day-to-day lives. Leveraging these methods allows them to be more efficient in their interactions with clients and ultimately to grow their practices. Another way to think about it is that today’s advisors now have many tools in their toolbox to connect with their customers and prospects.

We live in a global economy—and when it comes to the distribution of retail financial products and services, we also live in a broader consumer economy. As modern technology is rapidly changing consumer attitudes and behaviors regarding the purchase and service of non-financial consumer goods, the insurance and financial services industry needs to throw out any insular views of distribution and adopt a framework that works with the broader world of retail distribution.

Eric T. Sondergeld, ASA, CFA, MAAA, is corporate vice president & director of Distribution & Technology Research for LIMRA. He can be contacted at 860-298-3957 or esondergeld@limra.com.

1 For convenience, the term “sell” means that an FP makes products or services available to clients, whether he or she actually sells them or purchases them on behalf of clients as part of an investment advisory practice.