An iPad In Your Future?

If Benjamin Franklin were alive today, it's a safe bet he would buy a Tablet PC. Will you? Recent sales figures make clear that a multitude of you will. To give you an idea: IHS, a market surveying company, predicts that nearly 65 million tablets will be shipped worldwide this year—up a whopping 270 percent from last year. This is for a class of devices that basically didn't exist just two years ago. 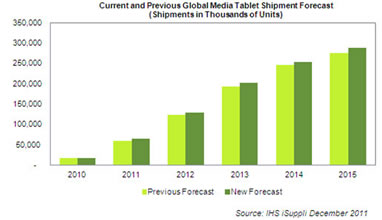 Still, so far only a small proportion of Americans have a tablet, 11 percent, according to the Pew Research Center's Project for Excellence in Journalism, which came out with a study on tablet use in the fall. The center's deputy director, Amy Mitchell, says those early adopters fit a pretty defined profile. "They are 30-49 years old, they tend to be more employed full time than the population overall, they have a higher family income than the population overall, and are more highly educated," Mitchell says.

When the iPad 2 was released last March 2011, around 500,000 units were purchased the first day. The year before, the original iPad rang up 15 million purchases. You can debate whether an iPad 2 is a superior choice to the tablet PCs offered by competitors of Apple. So far, the market is voting strongly in favor of the iPad 2.

I first viewed a demo of the iPad 2 at the October Annual Meeting, the Technology's Section's session Apps for Actuaries. Simplifying communications is a foremost objective of actuaries. Tablet computers are outstanding in this regard. I, too, thought, "What would Benjamin Franklin do?" A week later I had my new iPad 2.

If you are ready to buy an iPad, the blog Gadgetwise has a concise article to help you decide how much to spend, based on considerations of: a. storage; b. 3G or no 3G/wireless; and c. how much you travel.

Gadgetwise is a great source for catching up on the blinding pace of change in Personal Technology. It runs in the NY Times: http://gadgetwise.blogs.nytimes.com/2011/03/10/how-to-buy-the-right-ipad/ The comments from readers that follow the article are tremendous. This article hits the sweet spot for sorting out the iPad options.

Rich Junker, FSA, MAAA, CLU, is an actuarial consultant at Junker Consulting in Tampa Bay, and can be contacted at richardjunker@tampabay.rr.com.