A Reflection on Jack Bragg's "The Future of the Actuarial Profession"

An updated interview with former SOA president Jack Bragg and additional commentary on an essay published in 1974. Parts of this article reprint the original material.

By Mark Spong and Brittany Lee

Understanding technology, mastering soft skills, being adaptable and having the ability to see the big picture are abilities that those at the forefront of the profession must cultivate. Jack Bragg is a good example. A past president of the Society of Actuaries, Bragg wrote an essay in the Transactions of Society of Actuaries in 1974 called “The Future of the Actuarial Profession as Viewed in A.D. 1974.” In that essay he developed a plausible scenario about the actuarial profession up to the year 2020 drawing from his knowledge on various subjects, including literature. In this article we compare what was expected then with what has happened in the last 33 years—a forecasting eternity, indeed.

“The future will come half by chance and half by design. If fully half is to come by design, then futurism, which can seek to steer that design, is a worthy science. This study of the actuarial profession looks upon as of greatest relevance those design steering aspects which can lead to a greater future.”
—Jack Bragg’s “The Future of the Actuarial Profession as Viewed in A.D. 1974” article

What is an actuary and how has the profession changed?
Bragg’s definition of an actuary is largely unchanged from 1974, except perhaps by the element of risk control, added in bold in the next sentence: “An actuary is a professional who is expert at risk control and the design, financing, and operation of insurance plans of all kinds, and of annuity and welfare plans.” The importance of risk control is reflected in the SOA’s curriculum, which includes a track dedicated to Enterprise Risk Management and the creation of the Chartered Enterprise Risk Analyst designation. In a professional setting, the role of some actuaries (e.g., chief risk officers) focuses on understanding and controlling risks broadly defined.

The current number of actuaries (FSAs & ASAs) greatly exceeded the article’s prediction (see graph below). In a recent interview Bragg made the following reflection: “I am glad the actual results have exceeded the projection. It is time for a new survey and an attempt should be made to include the non-traditional employers, such as data collectors, artificial intelligence developers, medical care groups, etc.” Indeed, the scope of the profession has expanded and recent changes in the exam system (e.g., the addition of predictive analytics) illustrate how actuaries are expected to become players in new fields. 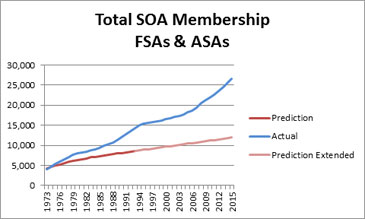 Bragg predicted that patterns of employment would also change between 1980 and 2020. “Job rotation, even among senior personnel, will become common.” The idea that professional development means continually learning and taking on new roles has become the norm.

Millennials now make up the largest segment of the workforce in the United States. Bragg’s prediction is confirmed in Deloitte’s 2016 Millennial survey, which states that “two of every three respondents hope to have moved on [from their current employer within 2 years], while only 16 percent of Millennials see themselves with their current employers a decade from now.” It is evident that the new working generation has the thirst for change and continuous job-learning.

Another important prediction has to do with the key role that soft skills, particularly communication, play in the work environment in which actuaries participate. For example, the SOA, prompted by employer’s feedback, now emphasizes presentation skills during the Fellowship Admission Course. The relevance of soft skills is dramatically attested by the changes in supplemental education and alternative careers. In the past, many actuaries learned to program to become more valuable employees, whereas today earning an MBA is probably the preferred path to become a better-rounded professional. This shift in skill requirements also reflects how actuarial roles have changed.

Innovation can be driven by technological evolution and big data analysis. Bragg notes, “We no longer have the stimulus of a coming millennium, but the needs for creative visions is just as great as ever. ‘Futurism’ may not be thrown around [as much today] but ‘Predictive Analytics’ is.” Indeed, the inclusion of predictive analytics in the actuarial curriculum shows that the SOA is trying to keep up with new trends.

Actuaries who so desire can and should try to pursue non-traditional roles such as chief financial officer and chief risk officer. Technological change and the rise of InsureTech presents not only challenges to the profession but also opportunities to be exploited.

How have actuaries dealt with the myriad of negative external factors in recent decades and what more needs to be done?
A major theme of the 1974 article is a period of distress and an “age of meaninglessness” including the decline of institutions, evil dominating the news and a succession of “unmanageable” crises. In his article, Bragg, always looking at the good without losing sight of reality, made the following prediction: “It is the hope and forecast of this author that after a gloomy period of the politicized society extending perhaps until A.D. 2000, a bright period of the corporate society will emerge, characterized by social responsibility.” When recently asked to comment about his prediction, Bragg noted, “I still believe that the corporate society is emerging, but nowadays it must be interpreted to include the myriad of small enterprises which exist (even in the actuarial world). Ruthless commercialism (quick grab) operators have been squelched a bit. After the 1974 paper came out, there were SOA sessions which recognized that the only way to make a long-term profit was to do a real honest job for the public.” In other words, to stay relevant, the actuarial profession must remain reputable. Without public trust, the value of actuarial skills and expertise are compromised. This idea is reflected in the SOA’s Fundamentals of Actuarial Practice modules which stress integrity, honesty and acting in the best interest of society.

One of the likely scenarios presented in the original article was a major depression between 1974 and 2020 caused by “a series of coincidences or political mistakes” with the main ingredient being “uncontrolled disorder in the international economic system.” The high inflation during the Carter administration and the Great Recession of 2007 make the prediction appear as the work of a wizard.

Current low interest rates provide actuaries with the opportunity to develop innovative solutions to financial and insurance problems. When asked about interest rates, Bragg recalls, “In 1986, Georgia State University requested and published my book, Protecting Against Inflation and Maximizing Yield. This book promotes: a) a business cycle approach, b) a very good prediction system, and c) a prudent mixture strategy (PMS). I believe that it is similar to the system used by the IMF. The entire system was used in International actuarial meetings and was even used by the Conference for core credit. Even a major University president used the system for his endowment plan returns. The PMS yield, which I continue to follow, has held up pretty well. The Society of Actuaries still has not recognized this methodology and I think it should do so.”

Looking at how the insurance industry landscape has changed in the last few decades, what trends do you expect to continue going forward?
“Decreased interest in life insurance has not occurred. Increased interest in savings has occurred but has been hobbled by low interest rates. The life cycle never took off. Trends that I expect to continue: Savings, health care security, and especially long-term care. Incidentally, at the time that Obamacare was launched, many people who didn't feel they had the education to navigate this new insurance situation sought out answers from those who did feel like they had a basic understanding and quite often the answer was, ‘Find yourself a good actuary.’”

As Bragg implies, actuaries are generally known for two attributes: technical skills and trustworthiness. The SOA’s exam process emphasizes the importance of acting with honesty and integrity.

“The 1974 paper emphasizes service to the public, which is still very key. The profession has always said that it provides such service. Here are some new services: a) The personal actuary movement which is very badly needed. b) Work on the entirely new field of ‘recovery,’ which is needed. This is the only good way to help people and control costs. c) Work on mental illness including recoveries. Senator Kent Conrad said of us: ‘you have the ability to tell the truth.’ That is the reputation we are trying to keep.”

The following scenario, the lighthearted career of a fictitious character named Richard McKee, is reprinted from Bragg’s 1974 article. It illustrates how public service can be incorporated into a career and provides an interesting point of comparison between the 1974 and the 2017 audiences.

If your career is tracking like Richard’s, congratulations for having become chairman of the board. The rest of us are working on it. One of the many valuable aspects of Bragg’s article is his call to actively shape the future, which is as relevant today as it was when he wrote his article in 1974. Bragg’s emphasis on integrity in the midst of crisis, service to the public in the face of uncertainty, and continuous improvement in a fast-paced environment are timeless lessons. Perhaps we should start making our predictions now for 2050 and working to make them happen.

Mark Spong, FSA, CERA, is an actuary at MassMutual in Springfield, Mass. He can be contacted at mspong@massmutual.com.

Brittany Lee is an actuarial analyst at MassMutual in New York City. She can be contacted at brittanylee@massmutual.com.

Editor’s Note: A copy of the 1974 article in pdf format is available upon request. Please contact carlos-fuentes@axiom-acturial.com.