Mortality is something we seldom talk about with non-actuaries in our industry and we assume consumers don’t want to think about it. So, it sits there in the background, out of sight, despite the fact that it serves as the foundation for life insurance and how actuaries set assumptions for pricing it.

Instead of mortality being behind the scenes in the product, what if it were brought front and center and used to engage consumers? 1 In an era where so many industry players are intent on engaging their customers, what if they made the product itself engaging rather than trying to add engagement on top of an unengaging product?

As life insurance industry players build customer engagement programs, probably the last place they’re thinking of engaging customers is around mortality. Perhaps this suggests an opportunity for innovation—to rethink mortality and how we develop and price insurance products.

For underwritten life insurance products, the variance around the expected mortality rate is lowest at policy issue, when the insurer has the most information about the insured. In fact, the purpose of underwriting is to better pinpoint the expected mortality of an individual and, in doing so, reduce the variance around that expectation. The result is usually placing an applicant into one of several underwriting classifications. Actuaries have predetermined the underlying mortality assumptions of people in those classes of a particular age, gender, smoking status, etc. While not necessarily explicitly determined or considered, each mortality rate is essentially the expected value of a distribution of mortality rates. The variance around that mean likely increases over time as underwriting recedes into the past, thus increasing the risk to the insurer (see Figure 1). 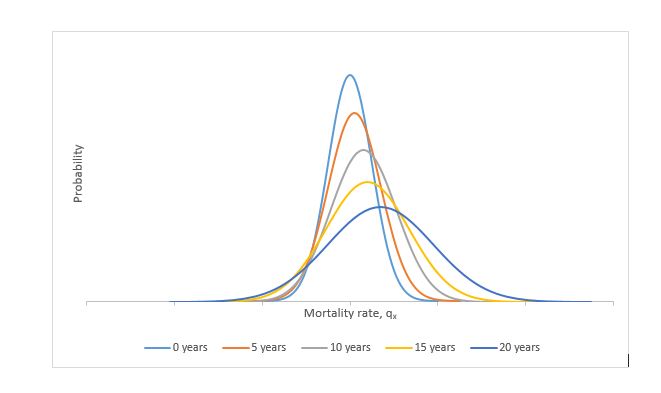 Life insurance companies already face increasing uncertainty in pricing over time, and accelerated and automated underwriting programs may result in higher mortality and may introduce further uncertainty. With a variety of new data sources available and becoming available, and the ability to conduct reflexive questioning instead of asking a fixed set of health questions, shouldn’t companies be able to better estimate mortality? If so, increased confidence around a mortality estimate would result in less variance around that estimate.

Further, if companies were to continue gathering information and learning about an individual insured after issue, they theoretically will be able to better estimate mortality over time. Instead of the level of confidence in future mortality for an insured increasing over time, it could potentially decrease (Figure 2). However, learning this information post-issue would be little more than an academic exercise unless companies can act on it. One way to do so would be to incorporate the ability to adjust premiums based on that information. 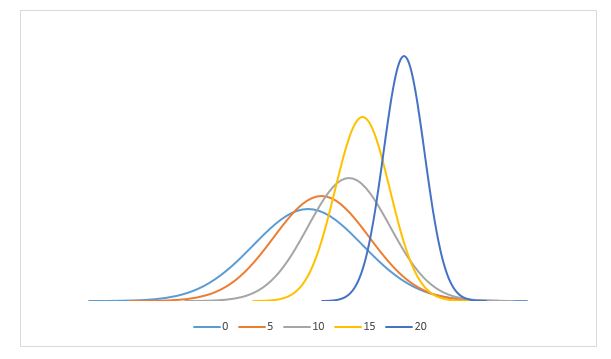 Note: As expected mortality rates increase (move to the right), uncertainty would decrease (distributions get narrower and taller).

The initial mortality estimates to get the policy started could either have more variance (using less information) or less variance (using more information sources) than traditional underwriting, but ongoing monitoring could narrow that over time.

Also, with improved methods for estimating mortality, particularly if a company believes it can better pinpoint mortality for an individual with a narrower confidence interval, it could conceivably depart from the standard underwriting classification system (standard, preferred, etc.) altogether and offer individualized pricing from day one. One in three companies with automated underwriting programs already predict the individual’s underlying mortality. 3 They currently take that result and convert it to one of a finite number of existing underwriting classes. So, the capability to predict mortality at the individual level already exists and is likely expanding. Continuous underwriting would be a natural extension of individualized pricing.

And, what if, in offering such a program, companies didn’t guarantee the price for the life of the policy but instead partnered with the insured on their insurance journey? The initial price they pay could be based on a lifetime of anticipated mortality, but renewal rates could be adjusted up or down (within limits) based on information resulting from things within the customer’s control. The author realizes that definition could be tricky.

Imagine if both the insurer and insured were committed to and invested in the health and well-being of the insured. The experience could be an amazing one for both. There are already several companies around the world who offer health monitoring programs to encourage life insurance customers to take good care of themselves. Examples include vitality 4 programs, which now exist in more than a dozen countries, and Momentum Life’s “Multiply” 5 program. Moreover, companies like AllLife offer continuous underwriting for clients with HIV or diabetes. 6 The benefits of continuous monitoring and underwriting are many for both insurer and insured. Insureds would have the potential for paying less for insurance over time and would benefit by the help and incentives to take better care of themselves. The benefits for the insurers are many (Table 1).

The ideas above are akin to thinking about life insurance the way the P&C industry thinks about automobile insurance. Table 2 demonstrates how this could work. In fact, life insurance is fairly unique among insurance products in that a usually level premium is set today for a product that could last a lifetime. Most other types of insurance have shorter terms and the insurer typically has options to change the price or even the decision to continue the relationship.

IF YOU BUILD IT, WILL THEY COME?

By 2016, more than one in five U.S. consumers were using an activity tracker and three in 10 said they were “very” or “extremely likely” to consider wearing one and sharing the results with a life insurance company in return for rewards. 9 That same survey yielded similar results regarding the sharing of data from a smart scale as well as health and activity information, such as trips to the gym, vaccinations, physical exams, etc. In all cases, younger consumers—especially Millennials—were much more willing to share data than older consumers. That number is likely much higher today, given increased awareness of the iOS Health app, which sometimes unbeknownst to the user surreptitiously tracks their activity such as steps and sleep. In fact, “44 percent of consumers would be happy for their insurance provider to utilize third-party data such as from Facebook and collect data about their behavior if it meant they were provided with a more personalized service and lower premiums.” 10

Many industry players have struggled with how to engage their customers on a product that is not very engaging and offers relatively few touchpoints where engagement could naturally occur. The industry tends to take for granted the basic structure of life insurance products and how it thinks about mortality. Could rethinking these assumptions lead to successful products that are by their very nature engaging?

Eric Sondergeld, ASA, is corporate vice president and director at LIMRA, leading the Technology Research and Developmental and Strategic Research teams.  He can be reached at ESondergeld@limra.com.

1The concepts presented here are also applicable to morbidity-based products.

2A normal distribution for qxused for convenience.

7Depending on program design and how it involves distribution.

9 2016 Insurance Barometer Study, LL Global, Inc. and Life Happens, 2016. In addition, according to a late 2017 survey by Statista, nearly half of Americans said they owned at least one wearable device.