Editor’s Notes: This article summarizes a presentation made by the author, Michael Frank, to the Government Finance Officer’s Association (GFOA) in New York on Dec. 6, 2018.

The ideas presented in this article reflect the author’s opinion and not necessarily those of the Society of Actuaries.

The title of the presentation was “Recent Developments in the Healthcare Market.” It was divided into the following sections:

One of the key topics in the presentation was the "False Claims Act" (the Act) and similar laws involving health care provider billing fraud. Approximately 100 people attended the meeting and a good number shared their experiences as it relates to this law. Almost 80 percent of the group responded to surveys in the meeting that illustrated that they believed they were victims of fraud as defined in the Act.

Sample criteria from the Act that would highlight fraudulent health care billing include:

As related to the above, also discussed was the Association of Certified Fraud Examiners which  released information in 2013 on the 10 most common health care billing fraud schemes that are consistent with the criteria in the False Claims Act.

This high percentage is not surprising given the many cases in the public domain of violations to the Act. We discussed several of these cases in the session. It was noted that a couple of states have already passed laws regarding the False Claims Act and that all should consider doing the same. Many of the attendees at the GFOA conference were finance professionals working for municipalities, which interestingly enough, were partially insulated from some of the fraudulent billing practices, since they had low deductible and low copay costs.

In the context of billing fraud and need for further prevention, we discussed a variety of topics including areas necessary for change. Topics included the following:

As part of the discussion, we discussed various large claims and how those claims potentially could apply to the False Claims Act criteria of fraud. In the table below, we show how billing changes in billing patterns can inflate medical bills. In the session, we discussed how certain costs that were normally billed as sterile supplies have become billed as implantable devices by some hospitals (e.g., services moved from service codes 272 to 278 and 279). The example below was used to show how changes in billing practice will influence claims reimbursement. 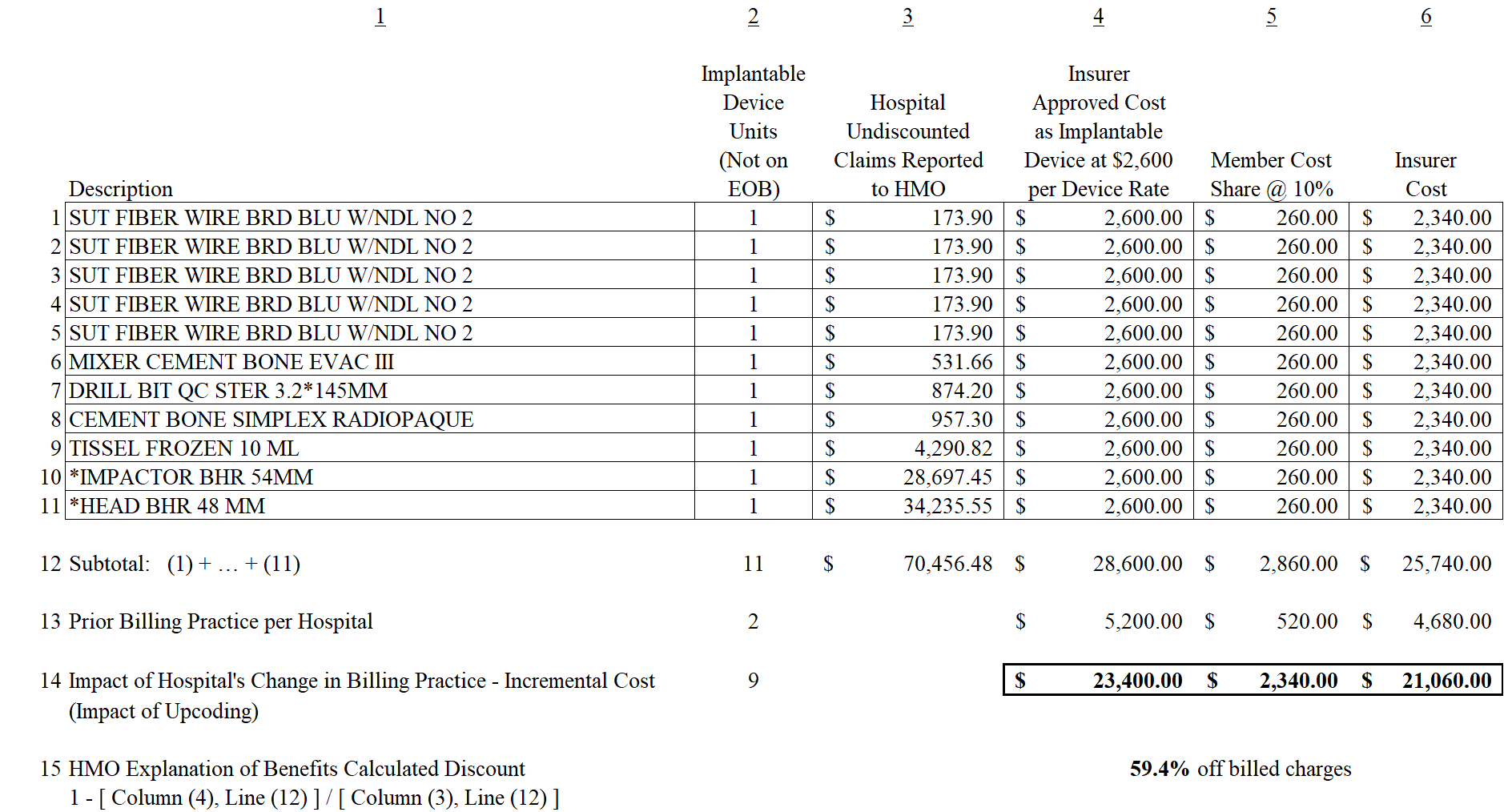 Some key highlights to the above example are:

Some information not illustrated in the above example was discussed in the conference. For example, we compared the amounts reimbursed per suture ($2,600) or five sutures at $13,000 approved charges, to the fees approved and reimbursed for the physicians in the two hour surgery, i.e., $2,562.05 for the orthopedic surgeon and $2,145.00 for the anesthesiologist.

The above example is important to actuaries and insurance professionals since it highlights how medical billing practices continue to evolve, and how artifical intelligence is being used and potentially manipulated. At the GFOA conference, we discussed how changes in billing practices are occurring with some organizations as sterile supplies are becoming implantable devices (e.g., codes 272 being billed as 278 and 279 as described above). The above example shows how $28,600 for 11 units is approved for payment as compared to the prior reimbursement of $5,200 (note that the $5,200 was at 2.6 times the true cost). Implantable supplies discussed include hips, knees, pacemakers, shoulders, stents, etc.

Similarly, other services were discussed including physical therapy and occupational therapy (e.g., codes 420-434), infusion drugs (e.g., codes 636) and other professional services that have experienced similar changes. If you are interested in more details on any of the above, feel free to contact the author.