Cybersecurity ranks as the greatest looming threat, according to the tenth annual Emerging Risks survey of risk managers. The survey also revealed that the majority (73 percent) of risk managers project a moderate risk outlook for 2017, which is consistent with 2016 projections. The following summary highlights key findings from research conducted by Max Rudolph, FSA, CERA, MAAA, a member of the Society of Actuaries (SOA) and owner of Rudolph Financial Consulting, LLC.

Risk managers perceive cybersecurity (53 percent), financial volatility (43 percent) and terrorism (39 percent) to be the three greatest emerging risks for the third year in a row. Notably, retrenchment from globalization ranked among the top five greatest emerging risks this year, as survey respondents reacted to the rise of populism around the world. This particular risk was ranked as the twenty-first risk last year, demonstrating evidence of anchoring through recency cognitive bias, where responses gravitate toward recent events such as the U.S. election. 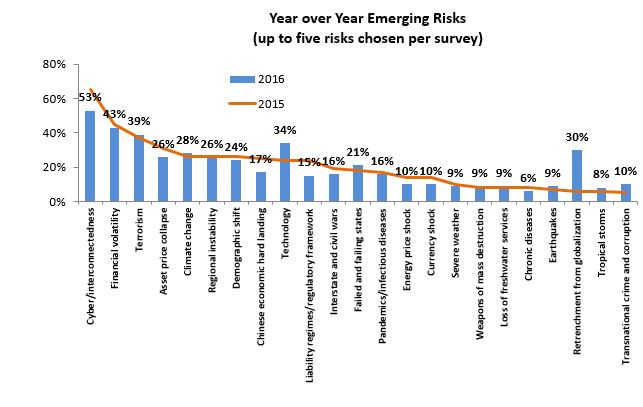 A total of 223 risk managers from across the globe participated in this online survey in November 2016. The research was funded by the Joint Risk Management Section (JRMS) of the Canadian Institute of Actuaries, Casualty Actuarial Society and Society of Actuaries.