By Kenneth Clark and Robert Eaton 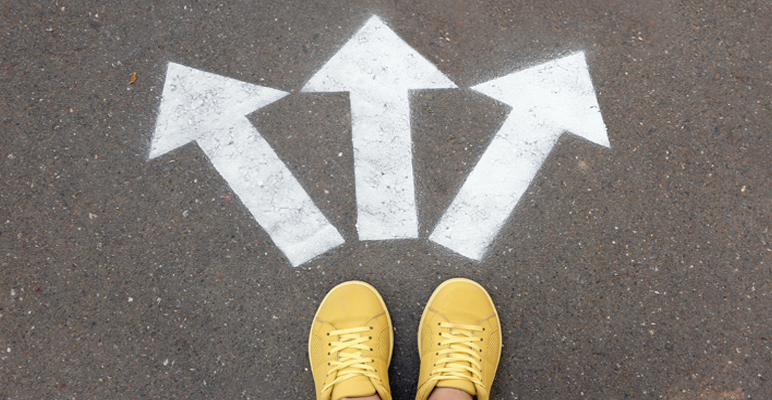 The senior market for supplemental medical products grows each year with the ‘silver tsunami’ of the aging population in the U.S. Medicare provides generous benefits to the elderly for most medical needs, but beyond those basic health needs there can be gaps in coverage. Medicare Supplement coverage fills in some of the gaps in original Medicare, while products such as short- and long-term care (STC, LTC) provide coverage for custodial care needs towards the end of life.

The short-term care market has seen modest growth in recent years, in part as a result of regulations that are less restrictive than LTC, and in part because the product is offered at more affordable premiums.

This article describes Medicare Supplement and short-term care products in more detail, and we compare their risk profiles. We explore the concept that these two products—when offered together—may provide a complementary hedge of certain policyholder behavior risks.

We illustrate an example demonstrating some of these product hedges, and we conclude by examining bundling these products at the time of sale.

Medicare Supplement (MedSupp for short) is insurance coverage that supplements Medicare Parts A and B (also known as Medicare fee for service or Original Medicare) coverage for those beneficiaries who elect to keep traditional Medicare. For purposes of this article we refer to Medicare Parts A and B coverage as simply Medicare, not to be confused with Medicare Advantage or Part D prescription drug coverage. Medicare covers all Medicare Allowed charges except for the beneficiary out of pocket obligations. These out of pocket obligations consist of deductibles, coinsurance and copayments. MedSupp plans offer a standardized benefit structure determined by Federal law[1] based on what beneficiary obligations are or are not covered.

MedSupp is generally sold on an individual basis to seniors age 65 and older. Given the standardized benefit structure, a carrier has limited levers to stand out from competition except for price. MedSupp is therefore a very price-sensitive market. MedSupp is typically sold through agents, brokers and increasingly direct-to-consumer means. Given this price-sensitive nature, member retention is a challenge and at the same time critical for long-term profitability. Surplus strain due to high upfront customer acquisition expenses and commissions may result in initial losses and profit emergence in later years.

In addition, statutory minimum lifetime loss ratio standards are significantly lower than industry experience given the price sensitivity of the market.

We explore these specific characteristics of the MedSupp market and how they introduce an opportunity to align with the STC market.

STC insurance policies cover benefits traditionally associated with LTC, but for a shorter period, typically less than one year. STC policies may reimburse or indemnify a policyholder for receiving formal care in their home, or for stays in an assisted living facility or a nursing home.

STC is usually triggered by a policyholder’s inability to perform some of their activities of daily living, or if the policyholder is severely cognitively impaired with Alzheimer’s disease or dementia.

STC policies are regulated separately from LTC policies, and by nature have a more limited benefit period. STC products do not have the same nonforfeiture or inflation protection requirements as LTC. The product faces some of the same actuarial risks as LTC—morbidity, persistency and investment earnings risks.

Policyholders needing long-term care face declining abilities as they age, and this pattern is reflected in how they receive care: first receiving care in the home, followed by transitions to community-based care or assisted living, and ultimately nursing home care. Some short-term care insurance policies have limited benefit periods (one year or less) but may provide that benefit once for each site of care. In this example a carrier could provide benefits for up to three years. In addition, if the policy is a reimbursement-type policy, and the policyholder does not use their full daily or monthly maximum amounts, the actual benefit period may be even longer.

Given the backdrop of these two product lines, we see that they may complement each other and more importantly provide a natural hedge for the carrier. To the extent that a carrier can gain policyholders in both product lines, the following dynamics may be possible.

How could companies think of structuring this product bundling in their business model? It’s imprudent to assume all policyholders will sign up for both products, and the STC and MedSupp products should be independently priced (i.e., priced on a stand-alone basis). But the product lines can be structured to encourage cross sales, for instance by using multi-policy discounts and producer bonuses. A rate discount would be easier to apply to the STC policy from a regulatory perspective, but this can also make the most sense from a business perspective.

What are the financial implications of this product bundling? For that we present the following simple case study demonstration.

First, we address both the MedSupp and STC products as priced on a stand-alone basis. We will consider a female age 65 at issue under this example. Tables 1A and 1B provide the underlying pricing results for the MedSupp and STC plans, respectively (as a percent of premium on lifetime basis, discounted at a 4.5% annual rate). 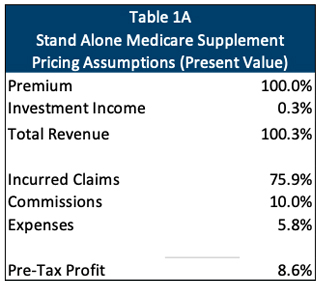 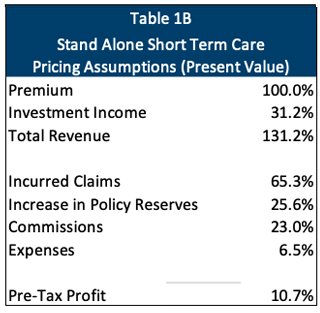 Note the different profitability dynamics of these two products. Namely,

Given that the MedSupp plan is attained age rated (while the STC plan is issue age rated), its expected loss ratio pattern in future years is much more stable than for STC, which assumes a steep loss ratio pattern. Even though STC has heaped commissions, higher than expected persistency will put pressure on overall profitability due to very high loss ratios in later years. On the other hand, the nature of heaped commissions and higher upfront expenses cause lower than expected persistency to put pressure on MedSupp profitability due to lost renewal profits.

For purposes of promoting bundling, for this case study we have built in the following features:

Table 2 provides the combined results under a scenario where 100 policies for both plans are sold, and they renew or terminate together. In this case we assume that policyholder lapse behavior is a blend of those from a standalone MedSupp policy and those from a standalone STC policy (an ultimate lapse rate of 5.8 percent in durations 5+). In addition to incorporating the above structure, we assume that the MedSupp claims experience is 10 percent lower than expected for the combined population due to the issuance of a medically underwritten risk, whereas the standalone MedSupp risk issued at age 65 is assumed to be open enrollment non-underwritten risk.

Under this scenario, lapse rates are considered favorable for both product lines. Profitability results for both product lines are greater than on a standalone basis. This is not unexpected for MedSupp given assumed favorable claim levels which offset the additional producer bonus.[3] For STC, this is the case despite the bonus as well as the 10 percent multipolicy premium discount.

Next, we assume lower lapse rates than we expect for a standalone STC product, in this case a 1 percent ultimate lapse rate in durations 5+. Table 3 shows the profitability results.

Under this scenario, STC shows a loss as would be expected. However, the low lapses increase MedSupp profitability which keeps overall profitability favorable. In fact, total profits are higher on a present value basis than a blended lapse scenario.

STC is vulnerable to lower-than-priced for voluntary lapse rates. The figures below demonstrate the profit impact from an annual policy year perspective. Figure 1a provides the expected profitability pattern for the STC plan on a stand-alone basis for 1) baseline STC lapse assumptions, and 2) Low lapse scenario. Results clearly demonstrate how low lapse experience reduces STC profits. Figure 1b provides the expected profitability pattern for the STC-MedSupp combo for 1) midpoint lapse assumptions which reflect the average of the baseline lapse assumptions of the respective product lines, and 2) the low lapse scenario. Results show that under a low lapse scenario, additional MedSupp profits offset lower STC profits, resulting in higher overall profits.

If we assume lapse rates even greater than assumed for MedSupp, the results are shown in Table 4. In this example, for instance, the high ultimate lapse assumption in durations 5+ is 10 percent.

Under this scenario, MedSupp profits have decreased significantly due to high terminations. Note that under this scenario, we have removed the 10 percent favorable claim level adjustment given high lapses and the expectation that individuals who lapse are healthier. Individuals who lapse STC policies are also likely to be healthier (if they were less healthy, they may hold on to their STC policy). However, high lapses increase STC profitability which keeps overall profitability favorable.

While this is a simple case study for one sample policyholder, and structured to model lapsation of both policies or none, the example demonstrates the dynamic present in bundling these distinctly different (but complementary) product lines. The example provides a framework for more detailed analysis and the determination of policy discounts and compensation incentives to fit a particular carrier’s circumstances.

This case study was presented for demonstration purposes only and does not reflect the actual experience of any MedSupp or STC business. Actual results for any particular book of business will deviate from those illustrated in this article to the extent the book of business deviates from the simplified assumptions made in our case study.

Statements of fact and opinions expressed in this report are those of the authors alone and do not necessarily reflect the opinions of Milliman or other employees of Milliman, or the Society of Actuaries.

Ken L. Clark, FSA, MAAA, is a principal and consulting actuary at Milliman. He can be reached at ken.clark@milliman.com.

Robert Eaton, FSA, MAAA, is a principal and consulting actuary at Milliman. He can be reached at robert.eaton@milliman.com.

[1] https://content.naic.org/sites/default/files/inline-files/MDL-651.pdf Subject to exceptions in Massachusetts, Minnesota and Wisconsin.

[2] MedSupp is typically rated on an attained age basis to allow for the most competitive age 65 rates. However, some states require issue age rating. Nonetheless, annual increases for claims trend are common across both rate structures.