How Can Hope Make the Impossible Possible? 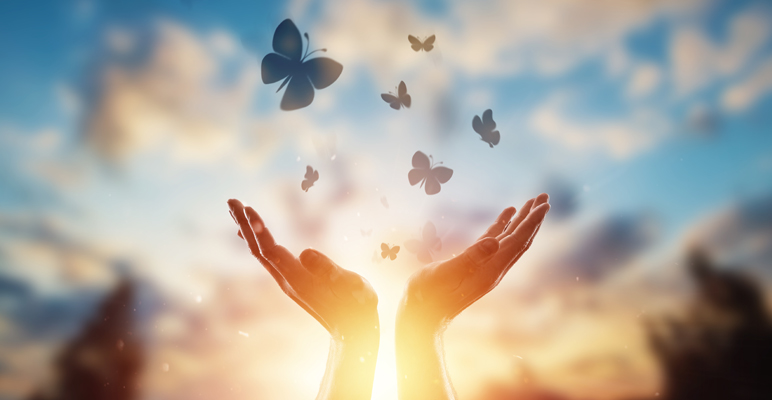 Pretend for a moment that you believe your life is going to hell in a handbasket. And then, suddenly, a comforting voice whispers in your ear, “There are possibilities you haven’t yet considered. Soon you’ll see them clearly. Your ideas will motivate you and you’ll work tirelessly to implement them. It’s going to be an exciting time.”

Who would say such a thing to you?

Let me formally introduce you to hope: It’s a positive emotion that lives in the netherworld. It appears only when circumstances seem uncertain or urgent. It arrives to buoy your spirits and reassure you that things can be better than they currently are.[1]

Surprisingly, hope has a cognitive component, too: “To hope is to believe that something positive, which does not presently apply to one’s life, could still materialize. ... It requires the belief in the possibility of a favorable outcome, which gives hope a cognitive aspect.”[2]

Shifting one’s perspective is one of hope’s key cognitive aspects. It has two parts: changing how you interpret what you’re seeing or experiencing; and believing that you have the power to take action to pursue the results you desire.[3]

Here’s a true story about a woman whose perspective shifted as she drove across Canada, on her way to Alaska.[4] As a result of the shift, her circumstances changed dramatically.

As you read the following paragraphs, I invite you to consider what the woman wanted, what obstacles stood in her way, how her perspective shifted, and how that influenced her circumstances changing.

What did Lynn Marchessault Want and What Obstacles Stood in Her way?

When Lynn Marchessault’s husband re-enlisted in the military in 2020, she cheerfully volunteered to drive their new 2019 Dodge Ram pick-up truck from Georgia to Fairbanks, Alaska. Her husband was stationed there. He had decided that re-joining the Army was the only way he could support his family after the pandemic descended.

“I can do it!” Marchessault might have exclaimed when she decided to drive to Alaska. After all, she was an Army veteran herself, and pandemic restrictions prevented her family from shipping their possessions to Fairbanks. How hard could it be to hitch a U-Haul trailer (with all their belongings) to the back of the truck, load the cab with their two kids (Payton, 12, and Rebecca, 10) as well as their two 11-year-old dogs and a 3-year-old cat, and drive 4,000 miles on her own?

The first obstacle emerged before Marchessault even left home: It took two months to renew her family’s passports. Thus, the trip she envisioned starting in September didn’t begin until November 10. By then, the weather in Canada had turned cold. She gave little thought to the fact that she had never driven in snow. Or that the all-season tires on her new truck were actually summer ones. Instead, she believed she had things under control. “I can do it,” she might have been singing to herself. “I can do it!”

The first 3,000 miles were a breeze. Marchessault drove from Georgia through North Dakota into Saskatchewan. “Beautiful views,” she wrote on Facebook. “Amazing.”

Yet border authorities instituted strict rules when she and her kids crossed into Canada. “You only have five days to get through Canada,” she penned on Facebook, “and you are absolutely not allowed to deviate from the main road or go inside anywhere to dine. You are not even allowed to dine at the hotel. You must get your food and take it back to your room. These are the rules for those transitioning through Canada to another destination.”[5]

That’s when Marchessault’s troubles began. First her phone lost its signal near the Canadian border, making navigation difficult. Next the truck’s windshield wipers stopped working properly. The truck’s summer tires slid over Canada’s mountainous roads. Then white-out conditions erupted, putting Marchessault and her children at great risk. There wasn’t a shoulder to pull over on, because of previous snowfalls. Hence, Marchessault had to stop in the middle of the road with her truck’s hazard lights blinking. Every cell in her body stood at high alert: she was white-knuckling it through Western Canada.

Five days later, Marchessault lost it at a gas station near a small mountain town in British Columbia. She started to cry. She was spent. She knew she couldn’t go any farther on her own.

“Are you OK?” a woman in the gas station asked her. Marchessault admitted that she needed help. The woman turned out to be an EMT.

Even though it was a Sunday, the woman took Marchessault to a tire store so she could see where it was located. Seconds later, the owner pulled up—he was meeting someone there. After the EMT described Marchessault’s plight, he said he’d be glad to help, even though it was his day off. Luckily, his store had four studded snow tires that fit her truck.

It was 4:30 p.m. when Marchessault pulled out of the tire company’s parking lot. Darkness was just settling over the remote town where she and her new EMT friend were. The woman drove 45 minutes out of her way to ensure that Marchessault got settled in a hotel for the night. Afterwards Marchessault told her that she needed help driving the rest of the way.

How did Marchessault’s Perspective Change and how did it Radiate Outward?

“I’ve had it,” Marchessault told her husband a few hours later, on the phone. “Border patrol can just come and get us where we are. That’s the only way we’re leaving Canada at this point.”[6]

What were the chances of Border Control rescuing Marchessault? Slim to non-existent, right? Luckily, other plans were being hatched.

As soon as the EMT got home, she put out a plea to her veteran friends on Facebook: “Was there someone who would drive Marchessault’s truck 1,056 miles to Alaska to help her and her kids?”

The EMT’s friends reached out to theirs, who sent a shout-out to a still wider group. It finally reached Gary Bath, a Canadian veteran, whose job was to assist the Canadian Air Force’s Covid-19 efforts.

“As far as I was concerned,” Bath would later say, “they were stranded and needed help. It’s the human thing to do to help them out. And I was in a position to drive them to the border.”[7]

Marchessault and Bath bonded during the next two days as her truck bumped along rocky roads. “I think we’ve become good friends,” she said afterward. “He’s a great guy and his wife is pretty awesome, too.”[8] The two families plan to get together soon.

What about Bath getting home? How did that happen?

Easy! His Facebook friends chipped in to pay the cost of his airfare home.

It was a win-win all around.

How Does Marchessault’s Experience Illustrate What Hope is and the Key Role Perspective Plays?

Lynn Marchessault wanted to drive 4,000 miles on her own. Yet when bad weather, poor driving conditions, inadequate tires, faulty wipers, and poor cell service intervened, her perspective shifted. She recognized that she needed help. Her story illustrates how powerful shifting one’s perspective can be. As the result of the shift, Marchessault (with the EMT’s assistance) recruited Gary Bath to drive her truck 1,056 miles to Fairbanks, Alaska, ensuring her family’s safety.

What Does Marchessault’s Experience Teach us About Hope?

Hope is an anomaly: While it’s a positive emotion, like gratitude, serenity, pride, awe, amusement, interest, inspiration, and love, it’s different in that it appears only in dire or uncertain circumstances. It’s focused on a positive future change.[9] And it depends on a change of perspective about one’s current situation.

So, the next time your circumstances seem bleak, I suggest you ask yourself: “How can I shift my perspective?” And when you do, it’s likely that you’ll hear hope’s soft voice saying: “Things will be fine. Just keep moving forward, one step at a time.”

Dr. Doreen Stern is a writer, motivational speaker and success coach in Hartford, Conn. Her dream is to become a best-selling author. She’s currently writing a book about creating the courage to act in spite of being terrified. She can be reached at Docktor@DoreenStern.com.