COVID-19 in Mexico and the Challenges for Actuaries 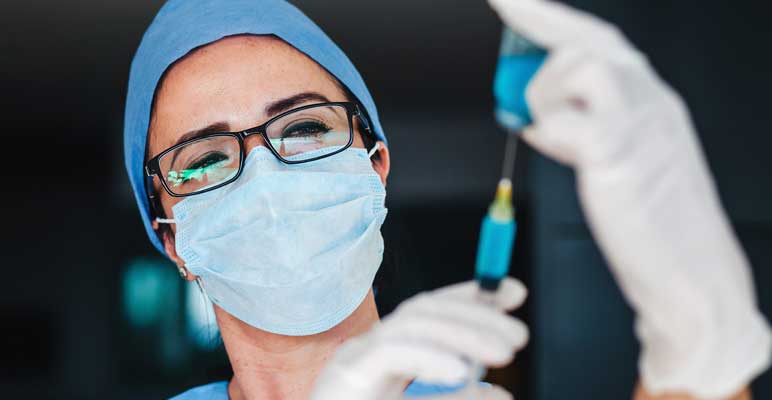 Many countries have suffered the ups and downs of the COVID-19 pandemic, and Mexico is no exception. Even worse, in contrast with European countries that saw numbers dip during the summer of 2020, Mexico did not. A first peak was reached at the end of July 2020, then a slight decrease in the following two months. Since October, Mexico has experienced the worst increasing trend of the whole epidemic.

In December 2020, the government announced a plan to vaccinate around 75 percent of the population from January 2021 until March 2022, without all the assurances that access to vaccines was already a closed deal. The bad news is, even in a best-case scenario, such a plan is not enough to avoid almost two thirds of the population getting infected by the SARS-Cov-2 virus, in most cases asymptomatically or with mild symptoms. 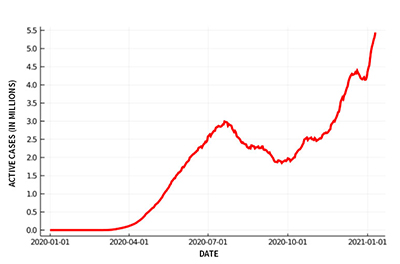 Adapting a classical Susceptible-Infected-Recovered (SIR) compartmental epidemiological model to include the potential benefit of vaccination under the current trend and calibrating such model with available data until the beginning of January 2021, it is possible to notice that the government’s vaccination plan will have little effect during the first semester of 2021, and that Mexico will probably reach herd immunity more by infections rather than through vaccination.

According to a serological survey of the National Institute of Public Health (INSP), as of last November, 25 percent of the Mexican population has already been directly exposed to the virus. Projecting that through the current trend, as of mid-January that direct exposure has probably been 36 percent, and it may reach as much as 64 percent at the end of the first semester of 2021, when Mexico might achieve an epidemic control for the first time.

Mexico’s Case Fatality Rate (CFR)—the percentage of confirmed COVID-19 cases that unfortunately died from it—is around 8.5 percent in contrast with the world CFR which is around 2.2 percent. It is important to remember that the CFR is quite sensitive to the testing rate in each country. Mexico has, by far, the lowest testing rate compared to other G-20 countries, and that is likely the main reason why Mexico’s CFR turns out to be at such high level. 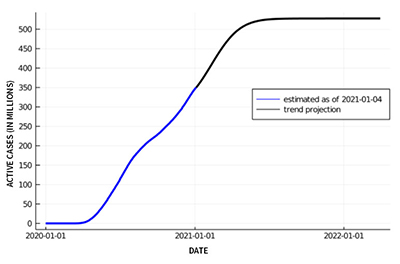 It is better to estimate the Infection Fatality Rate (IFR) which is the percentage of all estimated cases (confirmed or not) that die from COVID-19. According to excess of mortality studies released by the government, it is estimated that the total COVID-19 deaths in Mexico are approximately 2.5 times that of what has been possible to confirm through testing. Through the SIR model mentioned above, an IFR of 1.1% was calculated at the beginning of the pandemic. However, the IFR drops to 0.5% when the most recent data is used, which is no surprise since health workers have learned how to better handle COVID-19 patients notwithstanding the lack of specific drugs and vaccinations.

In absolute numbers, if the current trend continues, it might be possible that by the end of first semester of 2021, 80 million Mexicans (from a total population of 126 million) will have been directly exposed to the coronavirus and more than half a million Mexicans will have died—directly or indirectly—as consequence of the COVID-19 epidemic.

If just 5 percent had a severe illness form of COVID-19 this would imply 4 million survivors, according to preliminary medical studies, will suffer long-term sequels (also known as long COVID-19). This may pose an important burden on the Mexican public health system and bring a significant impact on major medical and life insurance products. Most insurance companies in Mexico did not consider COVID-19 impacts for repricing health and life during 2020. In the face of what it is still ahead, it seems they will need to reprice in 2021, unless they can keep leveraging from low loss ratios from other products such as motor and P&C.

Actuaries in Mexico seem to be faced with a Shakespearean challenge in 2021: to reprice or not to reprice? That is the question. Actuaries must decide how to combine the recent statistical information with what it is expected from the vaccination program, and the medical expertise and expectations on COVID-19 sequels. Another clear challenge is to make sure that IBNR reserves are adequate, considering the lags in reporting that has been experienced in COVID-19 claims in Mexico.

Many COVID-19 vaccines are already available, and still yet more to come, it is just a matter of time that mass production will be enough to fulfill the high demand for the first round of world vaccination, but recent reports of SARS-Cov-2 mutations introduce more uncertainty. Under slight variations of the virus, the already existing vaccines seem to keep working, but large-scale infections are the best soil for more and more mutations, and it is not clear yet how far and fast this could significantly reduce the effectiveness of the new vaccines.

Arturo Erdely, PhD, is a professor in the Actuarial Science Program at Universidad Nacional Autónoma de México (UNAM.) He can be reached at aerdely@acatlan.unam.mx.