Washington, D.C., Arlington, VA, Schaumburg, IL, and Ottawa, ON (April 24, 2018)—New Actuaries Climate Index™ data reported today by organizations representing the actuarial profession in Canada and the United States show that the five-year moving average of climate extremes across the two countries remains at the high recorded in winter 2016-17 and spring 2017.

Measured with the new summer 2017 data included, the five-year moving average of the Actuaries Climate Index remains at 1.14, a record-high value first attained in, and sustained since, winter 2016-17. The elevated index value reflects continued deviation of climate and sea level extremes from historically expected patterns for the two countries. 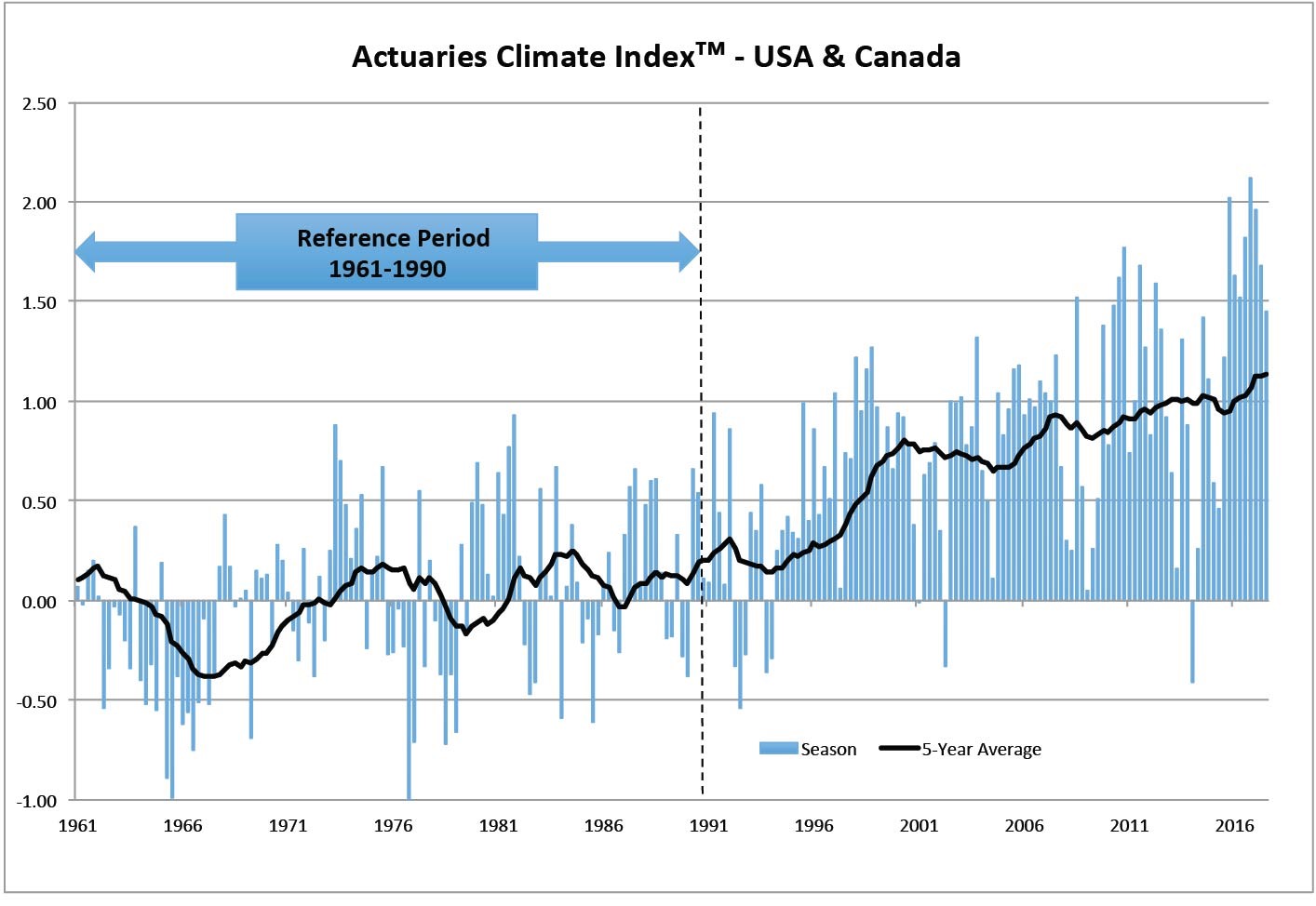 The Actuaries Climate Index is based on analysis of seasonal data from neutral, scientific sources for the six different index components collected since 1961. The index measures changes in extremes of high and low temperatures, high winds, heavy precipitation, and drought, as well as changes in sea level, expressed in units of standard deviations from the mean for the 30-year reference period of 1961 to 1990 for the United States and Canada combined.

Updated values are posted quarterly on ActuariesClimateIndex.org as data for each meteorological season becomes available. The organizations are also developing a second index, the Actuaries Climate Risk Index, to measure correlations between changes in the frequency of extreme events as measured by the index and economic losses, mortality, and injuries.

About the Sponsoring Organizations

The American Academy of Actuaries is a 19,000-member professional association whose mission is to serve the public and the U.S. actuarial profession. For more than 50 years, the Academy has assisted public policymakers on all levels by providing leadership, objective expertise, and actuarial advice on risk and financial security issues. The Academy also sets qualification, practice, and professionalism standards for actuaries in the United States.

The Casualty Actuarial Society (CAS) is a leading international organization for credentialing and professional education. Founded in 1914, the CAS is the world’s only actuarial organization focused exclusively on property and casualty risks and serves over 7,000 members worldwide. Professionals educated by the CAS empower business and government to make well-informed strategic, financial and operational decisions.

With roots dating back to 1889, the Society of Actuaries(SOA) is the world’s largest actuarial professional organization with more than 28,000 actuaries as members. Through research and education, the SOA’s mission is to advance actuarial knowledge and to enhance the ability of actuaries to provide expert advice and relevant solutions for financial, business and societal challenges. The SOA’s vision is for actuaries to be the leading professionals in the measurement and management of risk.