Accounting for Ceded Reinsurance Under LDTI—Precedent 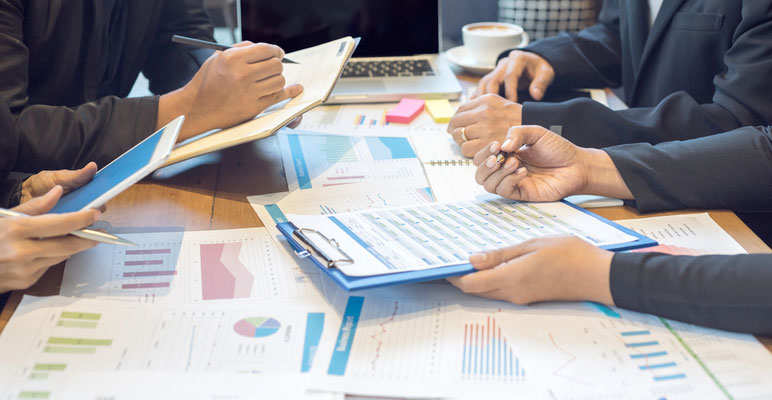 In two earlier issues of The Financial Reporter, I gave an overview of and a fresh look at ceded reinsurance accounting under GAAP’s Targeted Improvements to the Accounting for Long-Duration Contracts (LDTI).[1] In this article, I examine some techniques that have been used before to account for long-duration reinsurance and how they could perform under LDTI.

As in the “Fresh Look” article, I focus here on long-duration reinsurance of products that require net premium reserves and evaluate alternatives against three objectives:

Opinions vary over the proper or best ways to interpret GAAP’s limited wording on how to account for long-duration reinsurance. All methods described in this article (and some not described here) have been accepted by some as appropriate under GAAP prior to LDTI. Even so, we can’t assume that all will be universally accepted under LDTI.

If considering a change in method (beyond the minimum revisions needed to comply with LDTI) an actuary should consult with a qualified accounting professional to be sure the proposed method will be accepted and to determine whether the change would be subject to the preferability and retrospective requirements of Accounting Standards Codification (ASC) 250-10-50-1.

ASC 944-40-25-34 requires recognition of reinsurance recoverable “in a manner consistent with the liabilities” using “Assumptions … consistent with … the related liabilities.” In its Life & Health Insurance Guide, the American Institute of Certified Public Accountants (AICPA) advises that reinsurance recoverable should be measured using a net premium method with retrospective assumption updates (including both actual experience and assumption changes).[2] 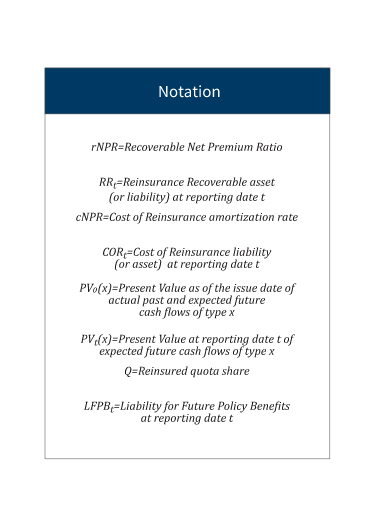 There are no standard names for the different techniques described in this article. For simplicity, I will introduce short names in quotation marks and then use those names throughout. (See the side bar for notation used in formulas.)

In the previous “Fresh Look” article, I described two methods of accruing reinsurance recoverable in proportion to direct gross premiums of the underlying reinsured contracts. Both “direct recovery” and “net cost” are net premium methods that can include retrospective assumption updates, and both have precedents in existing GAAP literature.

Direct recovery is described in AICPA Technical Practice Aid (TPA) 6300.12 as a method of accounting for reinsurance of universal life contract features that require an additional liability for insurance benefits (SOP reserve). As such, it is a recognized net premium method using current assumptions and retrospective updates. Applied to reinsurance of traditional contracts:

Net cost is described in section 17.7 of US GAAP for Life Insurers as a method of accounting for reinsurance of universal life contracts that require an SOP reserve.[3] Applied to reinsurance of traditional contracts:

A “standalone” net premium method is illustrated for traditional contracts in section 17.6.3 of US GAAP for Life Insurers and can be updated to include retrospective assumption updates.

A “mirror” method for coinsurance does not apply a net premium calculation directly, but its link to a direct net premium liability does effectively produce a net premium asset:

This is best viewed as a simplification that accurately matches the result of a more fundamental net premium method for quota share coinsurance covering the same proportion of all contracts within a cohort and requiring the same discount rate.

By itself, unearned premium does not comply with LDTI. Together with a suitable cost of reinsurance, it might be compliant. 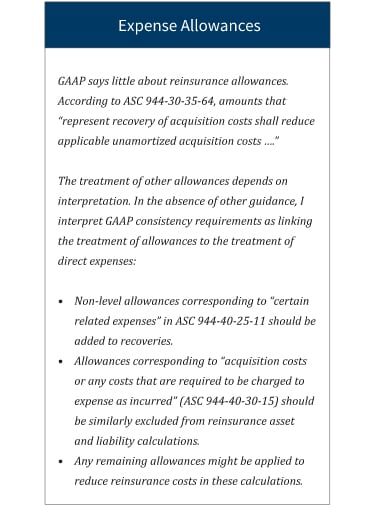 An “implicit” method is described in section 17.6.3.5 of US GAAP for Life Insurers. It does not accrue any reinsurance recoverable but does include reinsurance cash flows in gross profit. With LDTI’s elimination of gross profit as an amortization basis, the implicit method loses what meaning it has had and I see no opportunity to adapt it for compliance with LDTI.

(See the sidebar for considerations in handling expense allowances.)

Other than an initial difference in the context of a new reinsurance treaty covering previously issued contracts (which I will address in a future article) it is unclear what might be included in the “cost to be amortized.” We’ll consider this further in the next section.

The constant margin and alignment objectives are based on an understanding of GAAP’s objectives for long-duration reinsurance accounting. They are not explicit principles and, therefore, might not be strict requirements. Even so, they can be both desirable and useful as guidelines.

When reinsurance recoverable alone does not achieve performance objectives, a suitable cost of reinsurance calculation can close the gap.

Net cost will achieve both objectives for reinsurance premiums and recoveries.

Standalone will not achieve either objective except in limited circumstances.

Mirror will achieve both objectives in circumstances where it is recognized as compliant.

Unearned premium will not achieve either objective.

The following analysis does not consider an initial cost at inception of a new reinsurance treaty covering previously issued contracts. That will be addressed in a future article.

These formulas can be applied together with any of the reinsurance recoverable methods described above, or they can be simplified as described below when applied specifically with each method.[5]

With direct recovery, this reduces to the cost of reinsurance as described in my previous “Fresh Look” article.

For quota share coinsurance covering the same proportion of all contracts within a cohort, the unamortized cost of reinsurance is reduced to zero.

With net cost, the unamortized cost of reinsurance is reduced to zero.

Where mirror remains valid, the unamortized cost of reinsurance is reduced to zero.

Among the methods described in this article, only net cost can consistently achieve the performance objectives without a separate cost of reinsurance calculation. Interpretation may dictate that this be reported as reinsurance recoverable or as cost of reinsurance, perhaps depending on circumstances. Its effectiveness in achieving the objectives does not depend on that classification.

The direct recovery and standalone reinsurance recoverable methods can be applied consistently, but their effectiveness in achieving the performance objectives will often depend on concurrent use of a separate cost of reinsurance calculation. Whether that calculation is performed for all long-duration reinsurance or only for those situations where it normally produces a non-zero result is an operational concern.

The mirror method cannot be applied except in limited circumstances. Its simplicity, however, may still make it desirable in those circumstances.

Most current methods of valuing long-duration reinsurance can be updated for use under LDTI. Complexity, however, can vary significantly among methods if they are to achieve performance objectives while complying with GAAP’s methodology and assumption requirements.

Beyond the concerns addressed in this article, reinsurance raises some unique concerns relating to constraints and valuation cohorts. Those will be the subject of my next article.

Steve Malerich, FSA, MAAA, is a director at PwC. He can be reached at steven.malerich@pwc.com.

[3] All references to US GAAP for Life Insurers are from the 2nd Edition, published by the Society of Actuaries.