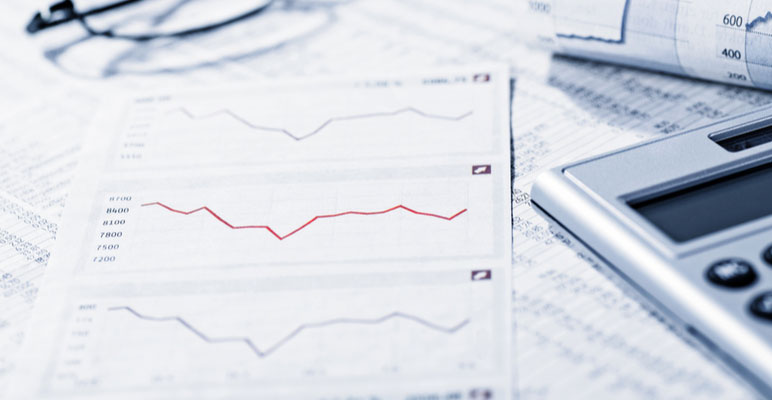 Long-duration targeted improvements (LDTI), also known as Accounting Standards Update 2018-12, include a collection of big and small changes to US GAAP calculations. Many of these changes will require us to develop a new “muscle memory” or instinctive sense for the way that income will react to unexpected variances, such as claims variances, financial market movements and nonfinancial assumption updates. It will be incumbent on actuaries to help finance and business leaders understand the financial impacts and develop that same muscle memory under LDTI.

In this article, we aim to cover the following:

This article assumes that the reader has a basic knowledge of LDTI and aims to build on that foundation.[1] Our analysis below is based on projected income statements for a variety of illustrative products; actual results can vary from our findings based on specific facts and circumstances.

High-Level Results at a Glance

For traditional life, limited pay and universal life (UL) types of products, and products with a market risk benefit (MRB), an overview[2] of impacts for selected variances is provided in Figure 1. The down arrow indicates income volatility is reduced under LDTI as compared to current GAAP, and vice versa for the up arrow.

Under current GAAP, traditional life products follow the guidance in Accounting Standards Codification (ASC) 944-40-30 (previously Financial Accounting Standard (FAS) 60) where reserves are locked in at issue using padded assumptions unless there is a loss recognition event. Under LDTI, however, the liability is calculated with current best estimate assumptions and NPR is unlocked retrospectively back to issue (or transition). During times of unexpected variances, income volatility will behave as follows under current GAAP vs LDTI:

Figure 2 illustrates these effects on a 20-year term life product.

DAC is not a major driver of income volatility under current GAAP or LDTI for these products, because of the lack of retrospective unlocking of the k-factor under either basis and simple amortization drivers; see the next section on universal life for further discussion of DAC under LDTI.

Given that NPR unlocking is an important lever that potentially reduces income volatility, companies may want to consider how the level of aggregation affects the potential for capping NPR at 100 percent. The more granular the level of aggregation, the more likelihood the NPR would be capped at 100 percent. Additionally, companies will likely want to avoid updating NPR on a lagged basis, as that would further increase volatility in income when the offsetting effects of claims/assumption updates and NPR updates happen in different periods.

Limited pay products’ results are similar to traditional products discussed above, using DPL as part of the mechanism to absorb variances. NPR will still unlock (other than for single-pay products, which do not have NPR), and then the DPL will act to further push the impact of experience variances and assumption changes into the future as it amortizes past the premium-paying period.

Under current GAAP, UL life products follow the guidance in ASC 944-40-30 (previously FAS 97), where the base contract reserve is set equal to the account value, premiums are not accounted for as revenue and only claims paid in excess of the account value are accounted for as an expense. DAC, URL and SIA balances are calculated using best-estimate assumptions and unlocked retrospectively each period when there are experience and assumptions updates. These balances are typically amortized over EGPs, where EGPs typically consist of mortality margin, contract administration margin, investment earnings spread, surrender charges, and other expected assessments and credits.

Under LDTI, reserves are still equal to account value, and there are no direct changes to the SOP 03-1 liability.[3] The calculation of DAC, URL and SIA balances has been simplified and made consistent among all long-duration contracts. They are now amortized on a constant-level basis over the expected term of the contracts, along with a number of other changes.

While the new DAC calculation and amortization method under LDTI does provide for a more simplified calculation, it comes with some consequences to income volatility during times of unexpected variances for UL products:

Figure 4 illustrates these effects on a UL product.[5] 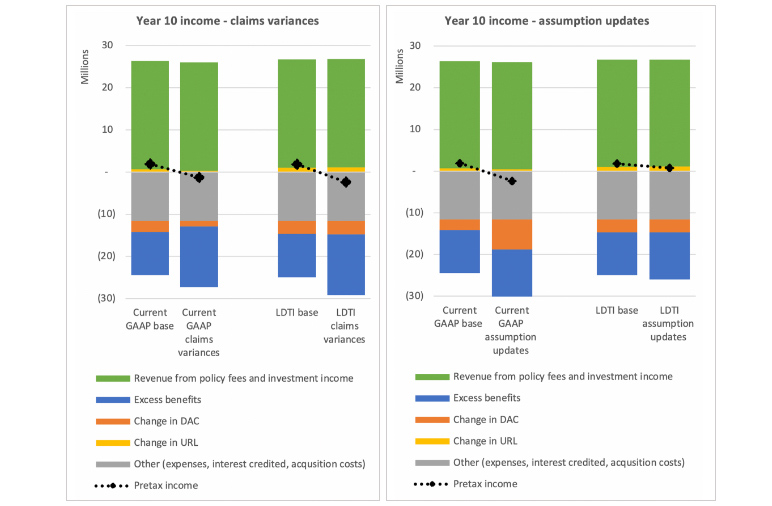 We also observed that under current GAAP for claims variances, the degree of offset provided by unlocking of DAC is highest near contract issue (where the offset percentage is equal to the net k-factor), and the offset percentage decreases steadily over the life the contract, as illustrated in Figure 5.

Given the increased level of volatility from claims variances, companies may want to consider whether they need to more tightly manage or reduce the risk exposure with this type of business.

LDTI introduces the concept of MRBs, which will now apply to many features previously measured as an embedded derivative or under SOP 03-1. The value of MRBs under the revised framework is determined using fair value (similar to embedded derivatives), typically based on a risk-neutral projection and a locked-in attributed fee ratio.

The following are some of the key changes to income volatility for these products (organized by current valuation methodology):

Figure 6 illustrates these effects on a guaranteed minimum income benefit (GMIB) product[6] that is accounted for under SOP 03-1 for current GAAP purposes and as an MRB under LDTI. 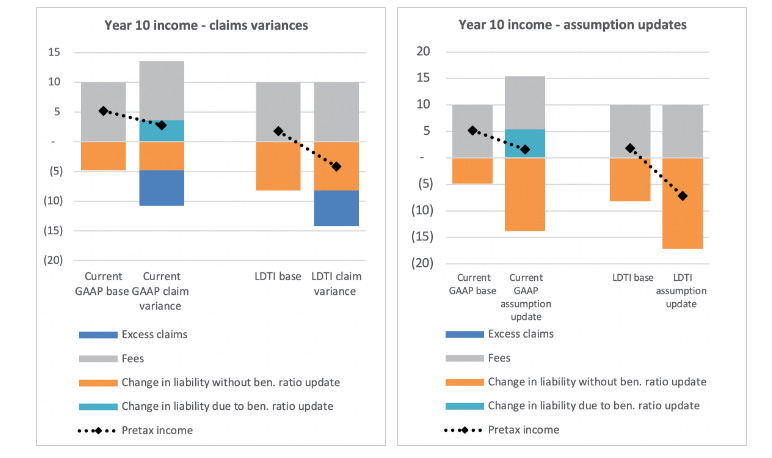 Companies have different policies and methods that will influence the level of volatility of the MRB balance (e.g., option versus non-option approach; which fees to incorporate in the attributed fee ratio; how to measure changes in OCS going through OCI). We also expect that companies hedging GAAP earnings will use this as an opportunity to refresh their hedging and risk management strategy for variable annuities, alongside updates to statutory accounting for variable annuities.

The changes to traditional and limited pay products in particular pose new challenges in understanding and explaining income. One of the more powerful tools in companies’ arsenals to do so is a source of earnings (SOE) report. An SOE report commonly arrives at the same net income/loss as the income statement, but with results broken out in a way that is more insightful and actionable.

Figure 7 illustrates one possible way to do this for a sample 20-year term product. In the current reporting year, actual mortality is 10 percent higher than expected, and future mortality assumptions have also been increased by 10 percent. Under the income statement view (left table), it is difficult to explain why there is a loss of $1,060. Under the SOE view (right table), the $1,060 loss is broken down into income drivers. We can clearly see that the mortality assumption update is the most significant driver of this year’s loss.

The overall structure of this SOE report will be familiar to many people. Our illustrative example shows additional line items for remeasurement gain/loss from experience variances, as well as two new line items reflecting the assumption update. Additionally, the expected amount of income coming through various line items will shift around as a result of changes to the locked-in interest rate, DAC amortization methods and the many other revised calculations.

As actuaries gain familiarity with the new mechanisms that LDTI introduces, they should seek to take the next steps that will provide ongoing value to management. They should analyze real products using financial assessment tools in order to identify suitable accounting policies and actuarial methodologies. They should update management reporting with input from key stakeholders and take a lead role in providing education to others in the organization. And they should reassess hedging and risk management practices in a way that considers financial reporting alongside the underlying economics.

Bruce Rosner, FSA, MAAA, is a managing director at Ernst & Young LLP. He can be reached at bruce.rosner@ey.com.

Joy Zhang, FSA, CERA, MAAA, is a manager at Ernst & Young LLP. She can be reached at joy.zhang@ey.com.

Daniel Dvorin, FSA, MAAA, is a manager at Ernst & Young LLP. He can be reached at daniel.dvorin@ey.com.

Jack Zheng, FSA, MAAA, is a manager at Ernst & Young LLP. He can be reached at jack.zheng@ey.com.

[1] For an introduction to the standard, see “Technical Line – A closer look at how insurers will have to change their accounting and disclosures for long-duration contracts,” EY website, https://www.ey.com/en_us/assurance/accountinglink/technical-line—a-closer-look-at-how-insurers-will-have-to-chan, updated 6 November 2020.

[3] The SOP 03-1 calculation remains unchanged under LDTI, but given the impact that LDTI has on the URL balance, there will be a minor secondary impact on the SOP 03-1 reserve balance.

[4] Assumes that the sum of the three balances is in a net asset position, as that is typically the case for most UL contracts.

[5] In this simple example, EGPs are positive and decrease steadily throughout the life of the contract, and the mortality and lapse assumptions are set such that there are no policies remaining at the end of 20 years.

[6] In this simple example, EGPs are positive and decrease steadily throughout the life of the contract. The mortality and lapse assumptions are set such that there are no policies remaining at the end of 20 years.