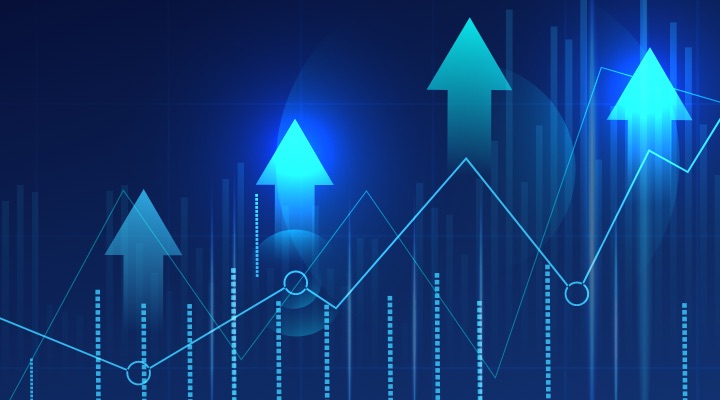 For over 10 years, a low-interest-rate environment has challenged the life insurance industry to find acceptable yielding investments, to manage reduced profitability caused by spread compression, and to offer competitive products to consumers.

Accounting Standards Update (ASU) 2018-12, commonly referred to as Long Duration Targeted Improvements (LDTI), will become effective Jan. 1, 2023, for public companies and Jan. 1, 2025, for non-public companies. The LDTI transition date starts two years before the effective date. As such, most public companies will publish comparative LDTI financial statements that start on Jan. 1, 2021, which coincides with the period in which interest rates started to rise.

Over this past era of low interest rates, companies have been reporting steadily decreasing traditional product margins in net income and building up unrealized investment gains in other comprehensive income (OCI) without any adjustment to reserves. The discount rates for traditional product reserves were set at issue based on the company’s best estimate of its portfolio yields[1] and then locked in. Reported profit margins have been declining due to positive recurring premium cash flows that have been reinvested at lower yields than were reflected in the locked-in reserve discount rates and due to harvested unrealized investment gains that accelerated the declining trend between investment income and reserve accretion. The accounting standards included no reserve adjustment for interest rates in OCI to offset the reported increases in unrealized investment gains. Without LDTI accounting changes, the industry would now experience large reductions to equity as its accumulated other comprehensive income (AOCI) reverses as a result of rising interest rates. The only adjustment to reserves permitted under the current accounting standards occurred when the industry experienced some notable interest rate related loss recognition events that forced abrupt reserve increases (particularly for long-term care and structured settlements).[2]

Under LDTI, traditional products’ net income and OCI will generally emerge more reasonably than pre-LDTI as interest rates rise. Net income is still determined using reserves that reflect a locked-in interest rate. However, more companies are including a pattern of increased interest rates[3] in these reserves, which will produce a levelized pattern of net income if rates do indeed rise. For business issued after the LDTI transition date, interest rates used in LDTI reserves will be based on generic upper-medium investment grade (low credit risk) fixed income benchmark yields. This will cause earnings to emerge either positive or negative depending on whether companies’ investment returns over or underperform relative to these benchmark yields.

LDTI includes an interest rate related adjustment for reserves in OCI to offset unrealized investment gains. As a result, OCI will be less volatile under LDTI, and the large equity reduction for the industry from rising interest rates is circumvented. OCI under LDTI will be a meaningful indication of asset-liability matching, in that companies with closely matched assets and liabilities will report less volatility. Finally, LDTI reserves adjust more proactively than current GAAP for insufficiency by capping net premiums at gross premiums. This eliminates the risk of built-up loss recognition events that have occurred in the past. Conversely, as interest rates rise, LDTI net premiums will fall below gross premium caps, and reserves will release rather than be stuck on the balance sheet.

Financial results reported for interest-sensitive products will be more transparent and sensitive to interest rates under LDTI. Companies without hedging or strong ALM matching will report more profits under a rising interest rate environment; however, they will also have significantly higher earnings volatility. Companies with well-matched investment portfolios and comprehensive hedging may be rewarded with reduced earnings volatility.

The current accounting for deferred annuity market related guarantees will be replaced with consistent fair value based reserves (market risk benefit or MRB).[4] An inception-to-date restatement of existing reserves reported through retained earnings as of the LDTI transition date is required. Many companies are expected to report an increase in reserves due to relatively low current interest rates—the magnitude would be adjusted with interest rate changes. The additional reserves will be recognized immediately and then released over time, setting these companies up for improvements in their GAAP return on equity (ROE) metric.

LDTI simplifies the amortization of DAC and DAC-like balances from a retrospective unlocking approach that was based on margins, including interest accretion and OCI components, to a “straight-line” prospective approach that does not have an OCI component. In addition to simplifying the methodology, volatility of DAC and DAC-like balances are greatly reduced. However, changes in DAC have historically worked to mitigate pre-LDTI GAAP volatility because DAC amortization was based on profits that included reserve changes. After the LDTI effective date, the effectiveness of ALM matching will be more transparent with the “DAC offset” veil removed.

Companies that manage interest rate risk for market related guarantees on an economic basis, either through derivatives or investment portfolio composition, will generally benefit from greater alignment between assets and liabilities under the LDTI reporting standards. Companies that have targeted mitigating either regulatory capital volatility or GAAP income volatility have an opportunity to revisit their hedging strategies, as the new fair value accounting would be more aligned with the ultimate economic view of interest rate risk exposure. Examples of actions include increasing the notional to include guarantees where reserves previously were not based on fair value, hedging higher order sensitivities (e.g., convexity), or electing fair value reporting for complete alignment going forward.[5]

Companies that have historically elected not to hedge interest rate risk will report more net income as MRB reserves decrease with rising interest rates but will experience GAAP volatility. These companies may have decided not to hedge due to seemingly expensive hedge costs under a low interest rate environment but will now have an opportunity to find their cost/benefit “break-even” points to manage hedging decisions as interest rates rise.

A rising interest rate environment also has several implications on U.S. statutory valuation. The implications can be grouped into three categories:

Maximum valuation interest rates used to determine statutory reserve components are derived through calculations that reflect, either directly or indirectly, the prevailing interest rate environment at or near the policy issue date.[6] The requirement that applies to each product is shown in Exhibit 1.

Exhibit 2 compares the maximum valuation rate for immediate annuities without life contingent benefits and with varying certain periods against the 10-year U.S. Treasury rate involved in the VM-22 calculation.

The impact of a rising interest rate environment would be lower statutory reserves for newly issued business due to the higher valuation rates used to discount future projected cash flows. That said, the increase in interest rates required to trigger a change in the maximum valuation rate varies by product and is large in certain cases. For example, the 12-month average of Moody’s composite yield on seasoned corporate bonds would need to increase from 3.34 percent as of June 2020 to 4.57 percent or higher for the period July 2020 through June 2021 to trigger an increase in the maximum valuation rate for whole life policies issued in 2022. Given that the composite yield has been below 4 percent through March 2021, it is unlikely that this maximum valuation rate will increase this year; however, if the upward trend in interest rates persists, we can expect to see higher valuation rates in the future. 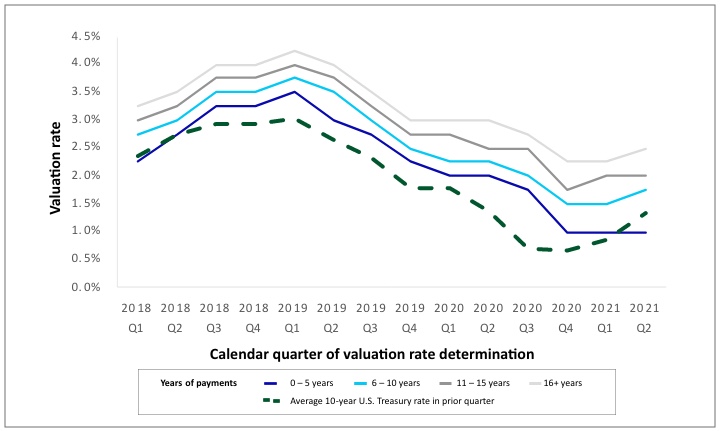 The above only applies to newly issued business. All existing business is subject to “locked-in” requirements and is not impacted by the evolving interest rate environment.

While statutory reserve requirements for the products outlined in the prior section define a locked-in discount rate, Actuarial Guideline 38 (AG 38), AG 48, VM-20, and VM-21 introduce a prescribed interest rate scenario generator that derives discount rates for reserves and total asset requirements of certain life and variable annuity products.[7] Refer to Exhibit 3 below for specific requirements.

The prescribed (deterministic and stochastic) interest rates are generated[10] based on the prevailing interest rate environment at the start of the scenario; however, they reflect a mean reversion parameter associated with the 20-year U.S. Treasury rate based on historical averages. (This parameter is 3.25 percent for 2021). While a rising interest rate environment would be reflected at the start of the generated scenarios, the scenarios would exhibit mean reversion to historical levels. Despite the mean reversion, the higher initial rate scenarios and paths to the mean reversion level would drive higher projected reinvestment and discount rates, ultimately reducing reserve and asset requirements. The net economic impact under rising interest rates varies subject to the level of duration mismatch in each life insurer’s ALM position. These considerations, which extend beyond valuation rates, segue into the next section on asset adequacy testing.

Exhibit 4 illustrates how the need for AAT reserves under rising interest rates is a function of ALM. Importantly, in an increasing interest rate environment for business where policyholder behavior is sensitive to prevailing interest rates, life insurers may face an increase in disintermediation risk (i.e., the risk of having to sell assets, potentially at a loss, to fund policyholder surrender benefits) For example, rising interest rates, particularly sudden jumps (e.g., New York 7 pop-up scenario with an immediate interest rate increase of 3 percent), may lead to higher actual and projected policyholder surrenders as policyholders seek out higher yielding investment opportunities. These increasing cash demands may require fixed income assets to be sold at depressed prices, and resultant projected losses (or lower gains) may result in reserve insufficiencies, necessitating the need for AAT reserves. 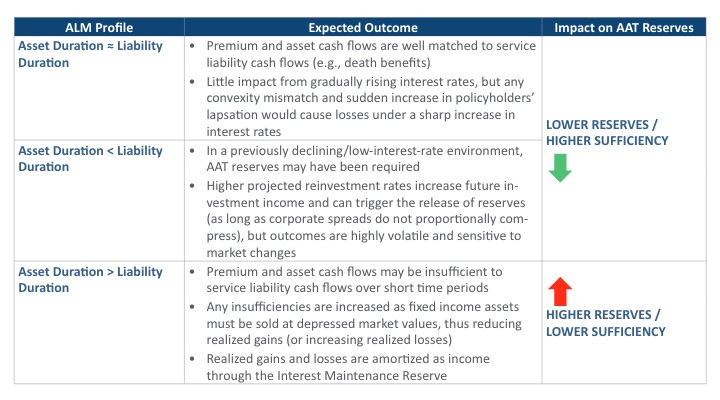 Dustin Plotkin is a principal at Oliver Wyman. He can be reached at Dustin.Plotkin@oliverwyman.com.

Su Su is a consultant at Oliver Wyman. She can be reached at su.su@oliverwyman.com.

Rey Malile is a consultant at Oliver Wyman. He can be reached at Rey.Malile@oliverwyman.com.

Kevin Desmond is a senior consultant at Oliver Wyman. He can be reached at kevin.desmond@oliverwyman.com.

[2] “Interest rate related” long-term care and structured settlement loss recognition events were due to a combination of underwriting and investment failures and not solely caused by interest rates.

[4] MRB applies only to annuity market-related guarantees that are other than nominal. The non-performance risk in MRB will be reported through OCI.

[6] For supplementary contracts and annuitizations, the relevant date would be the date of election of the supplementary features.

[7] The scope of products subject to scenario-driven rates is likely to expand to include fixed annuities, LTC, and other business in the future.

[9] Other life insurance products that do not pass the deterministic/stochastic exclusion tests would also be subject to this requirement.

[10] This section describes the current generator; a new generator that continues to reflect initial conditions and mean reversion is under development.