After a very long journey, the International Accounting Standards Board (IASB) issued IFRS 17 “Insurance Contracts” (IFRS 17) in May 2017. IFRS 17 replaces IFRS 4 that was issued in 2004. The overall objective is to provide a more useful and consistent accounting model for insurance contracts among entities issuing insurance contracts globally. Three years after the release of the IFRS 17 Standard, the IASB published the amended version of IFRS 17 on June 25, 2020. The revised effective date of IFRS 17 has been deferred to annual reporting periods beginning on or after Jan. 1, 2023.[1]

The premium allocation approach (PAA) is the optional simplified measurement model that is allowed under IFRS 17 for short-term contracts. While PAA is expected to be substantially less costly to apply than the general measurement model (GMM) or variable fee approach (VFA), the complexity and the implementation efforts should not be underestimated. This article summarizes key aspects of PAA and its related disclosure requirements.

(1) What are the criteria of applying PAA for underlying contracts?

An entity may apply PAA if, and only if, at the inception of the group:

(a) The entity reasonably expects that such simplification would produce a measurement of the liability for remaining coverage (LRC) for the group that would not differ materially from GMM; or

(b) the coverage period of each contract in the group is one year or less.

The above criterion (a) is not met if at the inception of the group an entity expects significant variability in the fulfilment cash flows (FCF) that would affect the measurement of the LRC during the period before a claim is incurred.

(2) How is the PAA LRC calculated at initial recognition?

(a) The premiums, if any, received at initial recognition;

(b) minus any insurance acquisition cash flows (IACF) at that date (unless the entity chooses to recognize the payments as an expense when incurred); and

(c) plus or minus any amount arising from the derecognition at that date of any asset for IACF or any asset or liability previously recognized for cash flows related to the group of contracts.

(3) How is the PAA LRC calculated at the end of subsequent reporting period (for profitable contracts)?

The PAA LRC is the carrying amount at the start of reporting period:

(a) Plus the premiums received in the period;

(b) minus IACF (unless the entity chooses to recognize the payments as an expense when incurred);

(c) plus any amounts relating to the amortization of IACF recognized as an expense in the reporting period (unless the entity chooses to recognise IACF as an expense when incurred);

(d) plus any adjustment to a financing component;

(e) minus the amount recognized as insurance revenue for services provided in that period; and

(f) minus any investment component paid or transferred to the liability for incurred claims (LIC).

(4) What is the treatment for a group of contracts under PAA that is onerous?

All PAA contracts are assumed to not be onerous at initial recognition unless facts and circumstances indicate otherwise. If facts and circumstances indicate that a group of contracts is onerous during the coverage period, an entity shall calculate the difference between (i) the carrying amount of the LRC determined under PAA (before including the loss component), and (ii) the FCF that relate to remaining coverage similar to what is needed under the GMM. The entity shall recognize this difference as a loss and increase the LRC.

(5) What are the key simplifications allowed under PAA?

(a) The entity is not required to adjust liability by the time value of money if it meets the criteria noted in IFRS17.56 or IFRS17.59(b);

(b) insurer may recognize any IACF as expenses when it incurs those costs, provided that the coverage period of each contract in the group at initial recognition is no more than one year [IFRS17.59(a)];

(c) contractual service margin (CSM) is not applicable to PAA, hence the corresponding presentation, calculation of FCF (unless for onerous contract), and inputs can be avoided; and

(6) What are the disclosure requirements under PAA?

(a) Which of the criteria in PAA eligibility it has satisfied;

(b) whether it makes an adjustment for the time value of money and the effect of financial risk;

(c) the method it has chosen to recognize IACF; and

(d) the LIC with separate reconciliations for (i) the estimates of the present value of the future cash flows (PVCF); and (ii) the risk adjustment (RA) for non-financial risk.

A simple short-term contract with a 12-month coverage period is created to illustrate the quantitative disclosure (analysis by remaining coverage and incurred claims) differences between PAA and GMM, with the key assumptions noted in Figure 1 and cash flows noted in Figure 2.

Figure 1
Assumptions for the Illustrative Example

* Assume no change in expectation in this example

The illustration of the quantitative disclosure for PAA (analysis by remaining coverage and incurred claims) and corresponding comparison with GMM are noted in Figures 3 to 6. 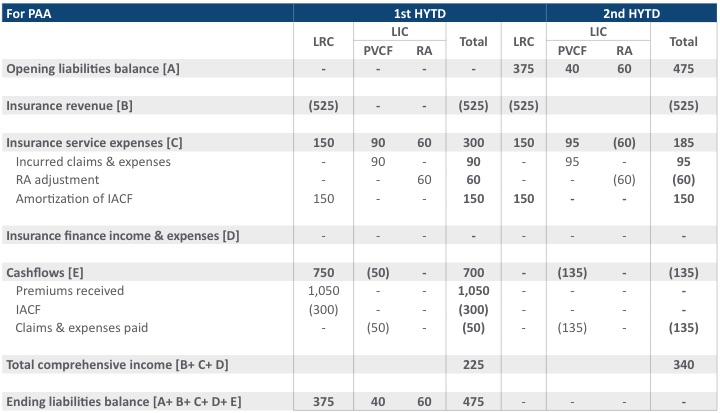 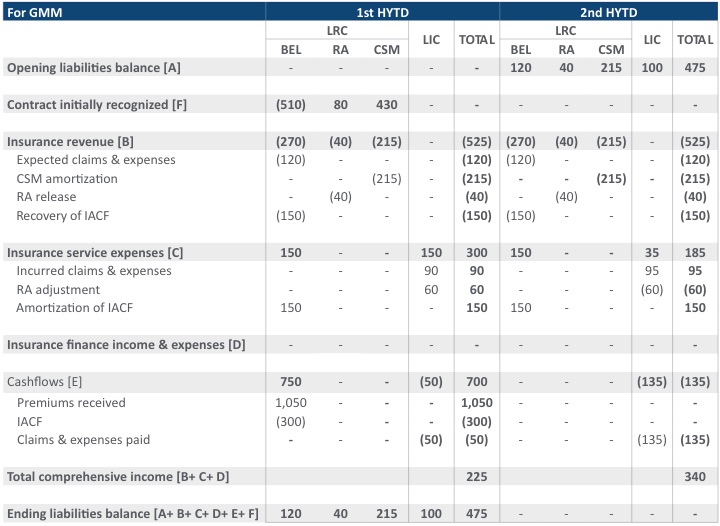 The illustrative example included in this article provides only one of the approaches that fulfill the disclosure requirements for profitable PAA contracts; we expect there are other possible formats of liability disclosure.

Upon adoption of IFRS 17, fundamental changes are expected on insurer’s financial statement preparation, presentation and disclosure. PAA provides certain simplifications which may help some insurers (especially non-life insurers) to manage IFRS 17 costs and operational complexity. Similar to prior financial reporting regime changes, it is generally expected that certain market consensus will converge on the approaches. The related methodology and considerations should be properly documented and approved within the entity’s governance structure, and agreed with the entity’s auditor. It is also important for individual entities to understand both the financial and operational impacts of the PAA disclosure requirements during the implementation journey.

Tze Ping Chng, FSA, MAAA, is a partner at Ernst & Young Advisory Services Limited in Hong Kong (EY HK). He can be contacted at tze-ping.chng@hk.ey.com.

Steve Cheung, FSA, is an associate partner at EY HK. He can be contacted at steve.cheung@hk.ey.com.

Linda Chan, is a senior associate at EY HK. She can be contacted at linda.chan@hk.ey.com.

Edwin Kwok, FSA, CERA, is a senior associate at EY HK. He can be contacted at edwin.cw.kwok@hk.ey.com.