Two primary points of this discussion: 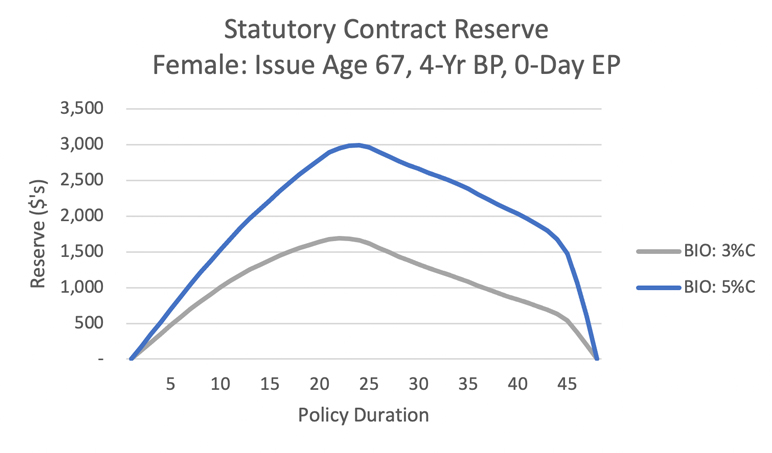 Option 2: Policyholders keep their original premiums. Future benefits are funded by their current reserve and their non-rate-increased premiums. In calculating the future benefits, the company uses new assumptions and the new Landing Spot interest rate. The Landing Spot must be determined.

To calculate a Landing Spot, insurance companies use four different numbers, all present-valued to the same date (the Valuation Date):

The Landing Spot is solved when (1) – (2) = (3) – (4). When this happens, the reserves are lowered from a curve similar to the upper curve in Figure 1 to a curve similar to the lower curve (but at the Landing Spot interest rate). Note that (1) on the valuation date, the two reserves curves will be equal; (2) both projected reserves curves are correct because they are based on the new assumptions; and (3) to the extent the current reserves are used and the newly calculated reserves are not used, the difference should be held as a policyholder-funded reserve (i.e., not an Additional Reserve) because it has been used to calculate the new benefit levels.

In the past, the reserve decrease, triggered by the policyholder’s lowered benefits, was not used for the policyholder’s future benefits but instead attributed to the company’s surplus. This situation was not Actuarially Equivalent. The insurance carrier had a vested interest in the policyholder choosing the Landing Spot.

To fund a group of policyholders, Actuarial Equivalence can be defined as the point where the insurance company is indifferent to the decision of a group of policyholders. These options can be considered equivalent when their calculated Future Loss Ratios are equal. The numerator of the Loss Ratio (L/R) is the present value of future incurred claims plus the present value of the annual increase in the contract reserve; the denominator is the present value of the future earned premiums. When these two L/Rs are equal, the two options are Actuarially Equivalent. At this point the carrier does not care which option the policyholders choose. In the past, when the carrier was simply comparing the offset in lowered premiums with the offset in lowered incurred claims, the carrier definitely preferred that the policyholder accept the Landing Spot (because the carrier kept the reserve decrease).

Premium rates are usually calculated by class and filed with each state insurance department on a class basis. However, Actuarial Equivalence includes the contract reserve, and the contract reserve varies by duration. Unless stated in the policy form, class does not include duration.

Actuarial equivalence applies to situations other than just Landing Spots. Co-insurance works very similarly, and the math is a little easier. Actuarial Equivalence also applies to a policyholder reducing benefits other than Inflation Protection.

Commonly, insurance premium rates vary by issue age and benefit options. If rate increases vary by all of these options, funding may come close to Individual Funding. If a rate increase varies by fewer than all of the options, it is clearly Group Funding, and anti-selection may occur.

This type of funding could also be done with a change from the 3 percent Inflation Protection interest rate to a new rate at, for example, 1.5 percent (whose premium rates were not available until the time of the rate increase).

This method could be used for any policyholder that wants to lower their benefits—at any time.

The thought of Actuarial Equivalence instantly brings up the issue of rate increases. Together the two thoughts bring up a number of related issues.

More traditional ways to lower the premium include changing, or perhaps removing, the options selected when the consumer purchased the policy. These usually include reducing the Maximum Lifetime Benefit or the Maximum Daily Benefit, and increasing the Elimination Period. It may include reducing or removing the Assisted Living and Home Care benefits. It can also include any riders and any options for the riders. When any of these benefits are lowered, the contract reserve is usually decreased. To the extent the contract reserve is lowered, Actuarial Equivalence should help to lower the premium for the new lower benefits. At the same time, there is a benefit to the carrier as the reduced benefits should reduce the need for a rate increase.

If contract reserves are insufficient, the carrier should seek a rate increase for the purpose of increasing contract reserves. If reserve strengthening is considered at the same time that policyholders are offered Landing Spot or co-insurance options, note that the reserves have been recalculated for these two alternatives and the new reserves should be appropriate since they were calculated using the new assumptions. For policyholders not included with the Landing Spot and co-insurance options, it may be simpler to consider the reserve strengthening separately in a rate increase filing.

Again, the Additional Reserves replacement may be simplified if considered as a separate process in a rate increase.

Projections Before and After Policyholder Behavior

While a rate increase filing should reflect the expected policyholder behavior due to the rate increase, there will be a difference in projected and actual behavior. Differences will lead to:

At the time of policy lapse, the CBUL has not been funded by any policyholder; this forces the insureds with CBUL to be included in all future rate increase filings. The remaining premium-paying policyholders pay for the CBUL option. Note that all in-force policyholders have the right to select this option.

There are several reasons that anti-selection may be expected to be a minor issue for rate increases:

Anti-selection can be a complicated subject for an insured who is 75, 80 or older.

Nonetheless, anti-selection should be considered. Some carriers have offered cash claims. Historically, the cash offers have had low selection rates. With more rate increases, and considering the cumulative impact of those increases, policyholders may become more upset, and carriers will perhaps choose to offer cash more often. Any cash should be less than the contract reserve, perhaps considerably less. The difference in the contract reserve and the cash should be used to cover any anti-selection.

A final issue is when Actuarial Equivalence should be required. The primary choices are (1) anytime the policyholder reduces their benefits and (2) at any time after an increase in the premium rates or (3) within a limited time period after a rate increase. Option 2 or 3 may be the most sensible. There may be some concern for policyholders who want to pay the increased premium but later realize that they cannot afford the increase and must lower their benefits. Therefore, a period of one year (or one year plus the grace period) after the rate increase may be fair as it makes sure that all policyholders have had a policy anniversary. Allowing Actuarial Equivalence at any time after a rate increase may invite anti-selection.

These filings should illustrate the impact regarding:

Cumulative rate increases for LTCi have become large and appear to be increasing. Policyholders have proven their desire to keep their policies in-force. Due to the magnitude of the rate increases, many policyholders will not be able to continue their current benefit levels. As many policyholders are age 75 or older, their election to lower their benefits may not be anti-selection as much as it is financial selection—they simply can no longer afford the continuing rate increases.

The insurance industry needs to be proactive in finding a solution. Since the policyholder has funded a contract reserve, which may not be necessary if they lower their benefits, a ready solution is to use the reserve decrease to help the policyholder fund their future benefits. After all, the policyholder funded their contract reserve for the purpose of paying future benefits- so why not let them use it? They purchased their policy for the long term, and they have paid their premiums for a long term, so let’s help them keep their policy for the long term.

Spreadsheets are available to assist carriers with the calculations for a Landing Spot and co-insurance. If interested, please contact Bob Darnell.

Robert W. Darnell, ASA, MAAA, is a senior life actuary for the California Department of Insurance. He can be reached at bob.darnell@insurance.ca.gov