The Return of the Traveling Actuary

By Jing Lang and Dirk Nieder 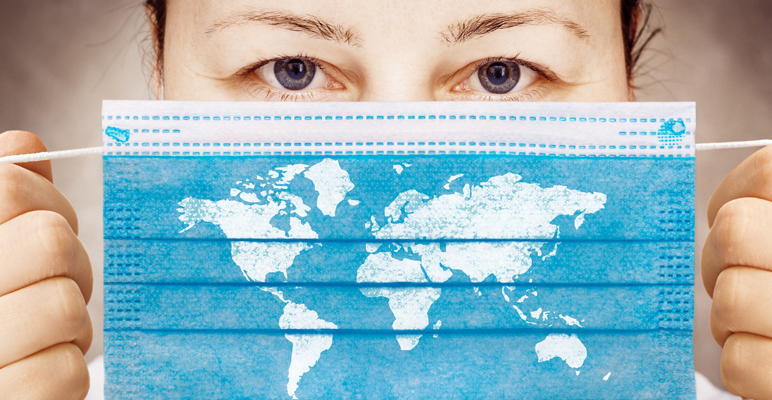 Authors’ note: Last March, Dirk returned to Germany after a business trip to Asia, which was cut short due to COVID-19. Ten months later, on the anniversary of Wuhan lockdown and first confirmed case in Japan, Dirk is back in Tokyo. He has to self-quarantine for 14 days, which is a great opportunity to reflect about the last year. This is his diary.

My arrival in Germany coincided with the introduction of unprecedented drastic restrictions of daily life, also often referred to as lockdown, which were targeted at slowing the spread of COVID-19. The federal government in Germany has only a coordinating role when it comes to measures addressed to curb the spread of a pandemic. On invitation of Germany’s chancellor Angela Merkel, the prime ministers of the 16 federal states of Germany agreed in mid-March on a framework to prohibit larger gatherings in the public, encourage work-from-home arrangements, require masks in public transportation, close universities, schools and kindergarten and move teaching to virtual, and close most shops, restaurants and pubs. Most painful for many people, hairdressers and nail parlours were closed as well. The German Bundesliga has stopped playing. As the implementation of these measures was in the authority of the states, the specific rules differed from state to state and resulted in huge confusion for people moving from one state to another state.

Non-essential travel into the EU had been banned for all non-EU-citizens from mid-March. Travel restrictions were also imposed within the EU, e.g., Germany temporarily restricted cross-border traffic from France, Austria, Luxembourg, Switzerland and Denmark. Even travel within Germany was discouraged or made virtually impossible through so-called “Beherbergungsverbote” (ban to provide hotel accommodation to travelers). 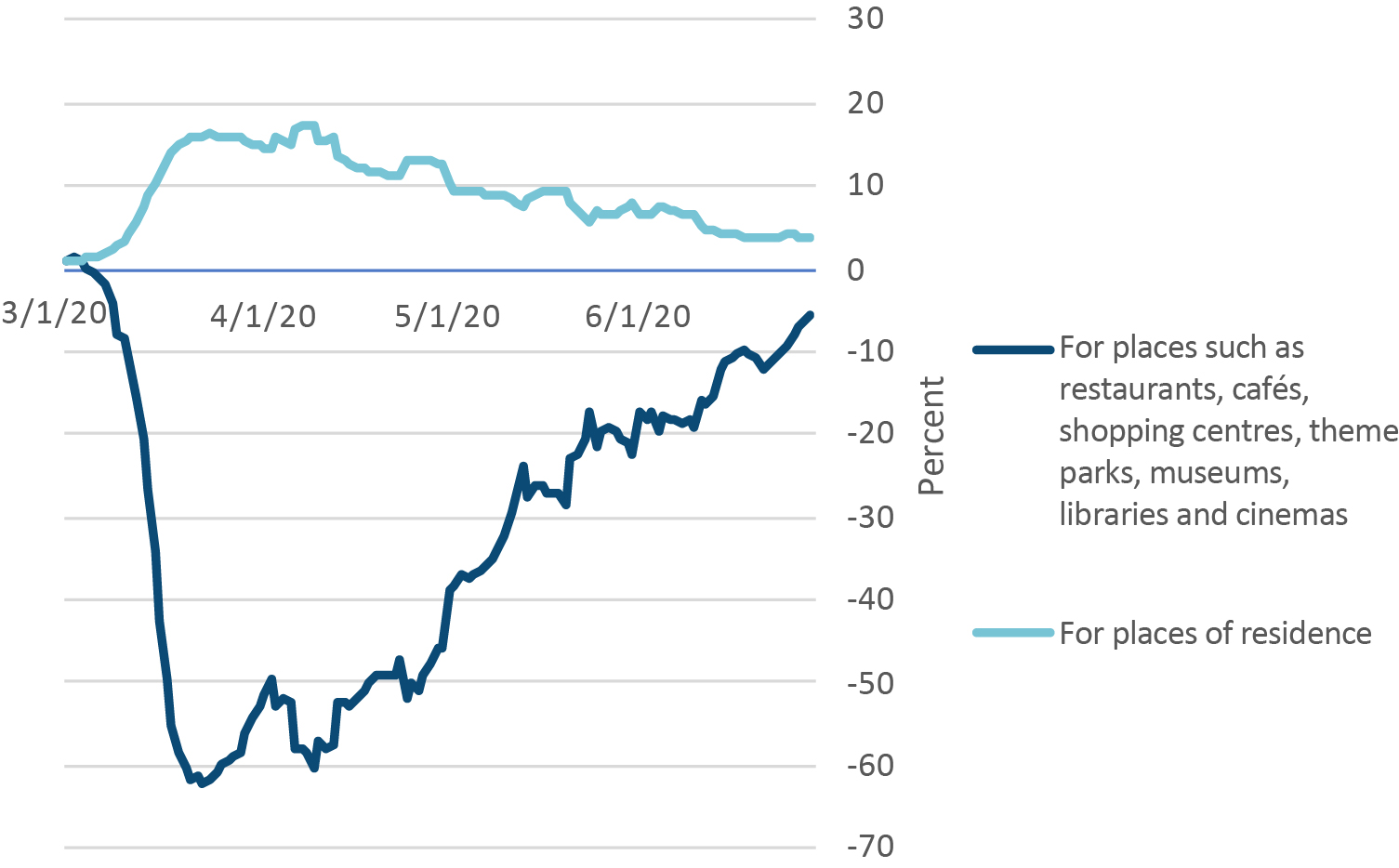 The infection rates consequently dropped almost as fast as they had increased before[4]: 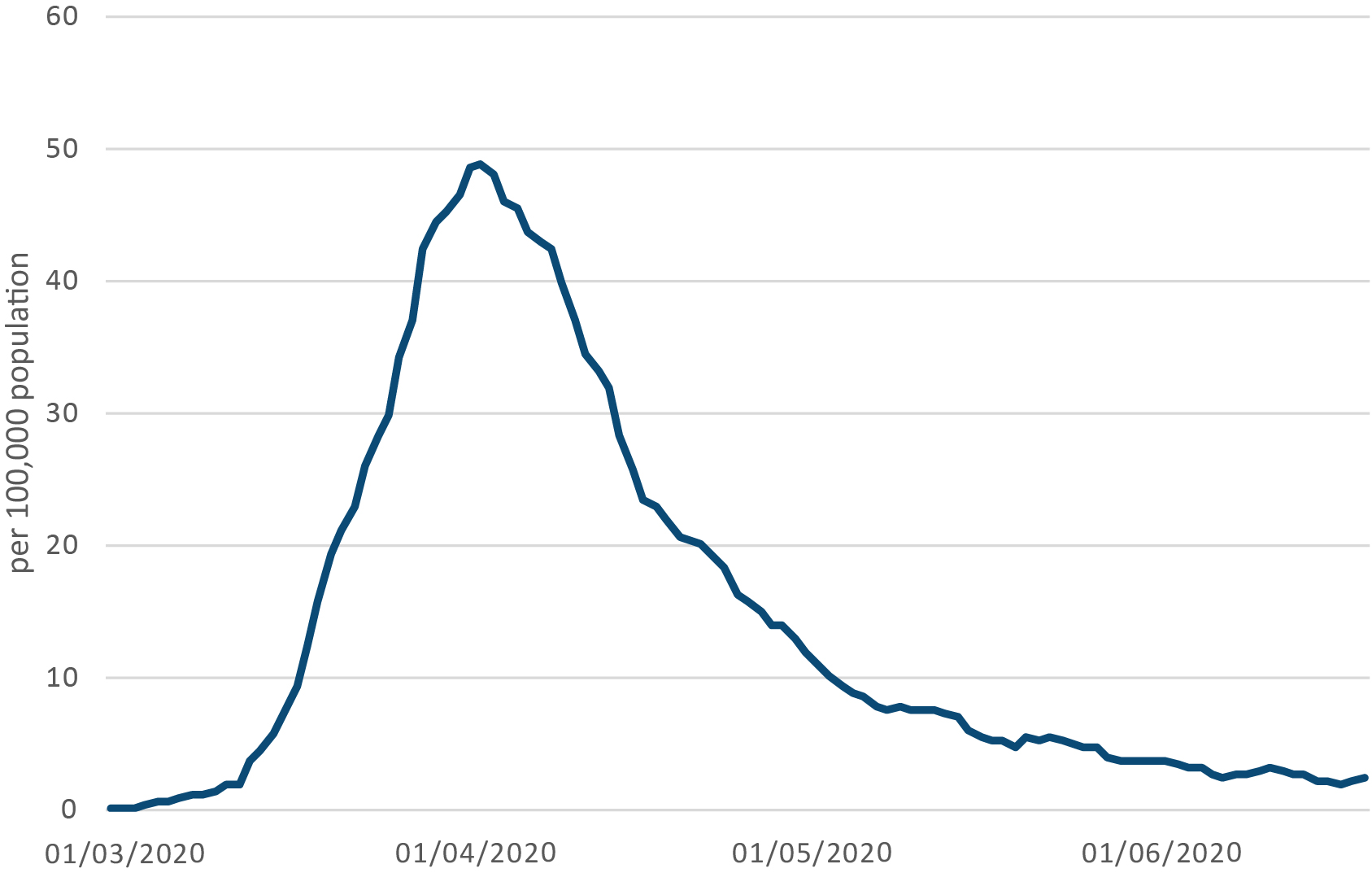 The significant drop in the COVID-19 infection rates allowed easing the travel restrictions within the EU just before the start of the summer vacations. Many Germans felt compelled to use the newly regained “freedom” to go on vacation, although often switching traditional holiday spots in Spain or Italy with the mountains or the seaside in Germany. The EU also considered lifting the travel restrictions with other countries whose epidemiological situation corresponds to the EU average.

I had been in Germany since April, mainly working from home and only occasionally going to our office in Cologne. Our internal and client communication had moved to tools such as Webex, Zoom and Microsoft Teams. It felt so easy to move our operation to home offices. COVID-19 certainly catalyzed the entire insurance industry’s digital transformation by decades.

Working with six to seven hours’ time difference between Germany and Asia nevertheless affected my work. I hence started to explore my chances to get a visa for Asian countries. But Asian countries had imposed travel restrictions that mirrored the requirements of the EU. Japan, in fact, not only banned foreign tourists and business travelers from entry, but even foreigners with legal residence in Japan who had left Japan before April 3 were refused re-entry. This left many foreign residents, including foreign students, who had left Japan before April 3 stranded abroad.

From July, I worked with an immigration service to get a visa for Japan. At the beginning of September, I got high hopes when I read on the website of the Ministry of Foreign Affairs (MOFA) that Highly Skilled Professionals—and I thought that actuaries would fall into this category—could apply for an entry visa. But the Embassy of Japan in Germany advised that “Highly Skilled Professionals” was meant for medical purposes only. It became clear to me that getting a regular business visa for Japan would be unlikely for the foreseeable future. I therefore decided to apply for an employment visa, turning me into a resident in Japan. I prepared the necessary documentation such as university diploma and certificates about my professional qualifications, resume, photo and assignment contract. On Sept. 29, I then lodged an application for a Certificate of Eligibility (CoE) that in turn would allow me to apply for a visa. And, in fact, Japan relaxed the border restrictions and I received the CoE on Oct. 19, and on Oct. 27, three months after my initial inquiry, I could pick up my visa.

One of the requirements for entering Japan was a negative COVID-19 test that had to be taken within 72 hours of departure of my flight. Concerned about not receiving the test result in time, I counted the hours and arrived at a test centre just 72 hours before departure of my flight. Luckily, I had been alerted a few days back that my original departure time was pushed back by two hours. Without this alert, I would have done the test outside of the allowed testing window.

“Ladies and gentlemen, welcome to Haneda Airport. Local time is 8:40 a.m. On behalf of the entire crew, I’d like to thank you for joining us on this flight. We are looking forward to seeing you on board again. Have a nice day!” It sounded all so familiar. Normally, I would rush out of the airplane to avoid the long queues at immigration. But nothing was the way it used to be.

We were required to stay seated after the airplane arrived at the terminal, as each flight was processed separately to avoid mixing of passengers. We had to wait for our turn. When we were finally allowed to disembark, we were ushered to a section of the Haneda airport that was closed off for handling the quarantine procedures.

After an initial check of the required documents, I was given a small vial which I had to spit into for a saliva-based antigen test. The saliva-based test result usually returns within 30 minutes to two hours at an accuracy rate which is comparable to a polymerase chain reaction genetic diagnostic (PCR) test, according to the Japanese health ministry. Until July 29, a PCR test had to be completed when entering Japan at Haneda and Narita airports, which can take between six hours to two days to administer. As travellers are not allowed to leave the airport terminal until they receive the result of a negative COVID-19 test, many travelers had to stay overnight at the airport. Cardboard box beds, which were stockpiled by the Japanese government for use in disasters, were set up in the baggage claim areas, which were consequently nicknamed “Cardboard Box Hotel” or “Corona Refugee Camp.” The picture at the following link (https://www.japantimes.co.jp/news/2020/04/15/national/cardboard-beds-narita-airport/) shows what it looked like.

After I had filled my small vial, I could proceed to the next section, where medical staff interviewed me about my travel history in Europe before departure of the flight, scrutinized the information in the health questionnaire that I filled out on board the airplane, and checked the result of my PCR test in Germany. I was a bit concerned about the PCR result document as it did not follow the format specified by MOFA. There had been reports about travelers who were required to return to their departure countries because the test did not comply with the requirements set by MOFA. I was furthermore asked about my transportation from the airport to the place where I would self-quarantine, and I had to demonstrate that I had both an app installed on my phone that would track my movements in Japan and subscribed to an application called LINE that allowed me to report my daily health status.

Finally, I could proceed to the waiting area to wait for my saliva test result. After about 30 minutes of waiting, my negative test result was confirmed, and I was permitted to proceed to immigration.

After baggage collection and customs, I proceeded to the limousine transportation I had arranged. As travelers arriving in Japan from overseas are not allowed to use public transportation such as trains or taxis, I had to arrange a special transportation service that cost about double to triple the price of a standard taxi fare and a high multiple of the train fare. After I arrived at my apartment, my landlady gave me an additional key for a separate gate to go to my apartment, which I should use during the period of the quarantine to minimize contact with other residents. And finally, after more than 20 hours from leaving my home in Germany, I could for the first time take off the FFP2 mask and breath freely. What a relief!

After my arrival in Tokyo, I had to self-quarantine for 14 days.

Japan learned from the coronavirus outbreak on the Diamond Princess Cruise ship that had been moored at Yokohama port in February 2020. The government identified the so-called “Three C’s” that created a petri dish for infection: Closed spaces with poor ventilation, Crowded places, and Close human contact. Companies in Tokyo were hence encouraged to adopt work-from-home arrangements. The Tokyo subway was consequently not as crowded as in pre-corona times, and windows of the trains were kept open at all times. Singing at karaoke parties, cheering at clubs and exercising in gymnasiums were also discouraged. The capacity in restaurants was decreased, allowing for more distance between guests, air circulation was increased using air purifiers, and staff wore triple protection: 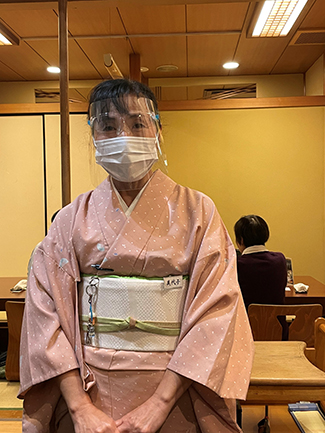 On Dec. 22, I left Tokyo to spend Christmas and the New Year in Germany. It was a very unusual Christmas season: Germany was in another lockdown, with restaurants and shops closed, politicians publicly discouraged the population to visit churches for Christmas masses, and contact restrictions limited even visits within families.

As reports of an even more contagious strain of COVID-19 appeared, known as the B.1.1.7 lineage, discovered and quickly spreading in UK, the EU temporarily closed its borders to travelers from Britain. Also, Japan issued new border restrictions, limiting entry to Japan to slow down the spread of the new strain. 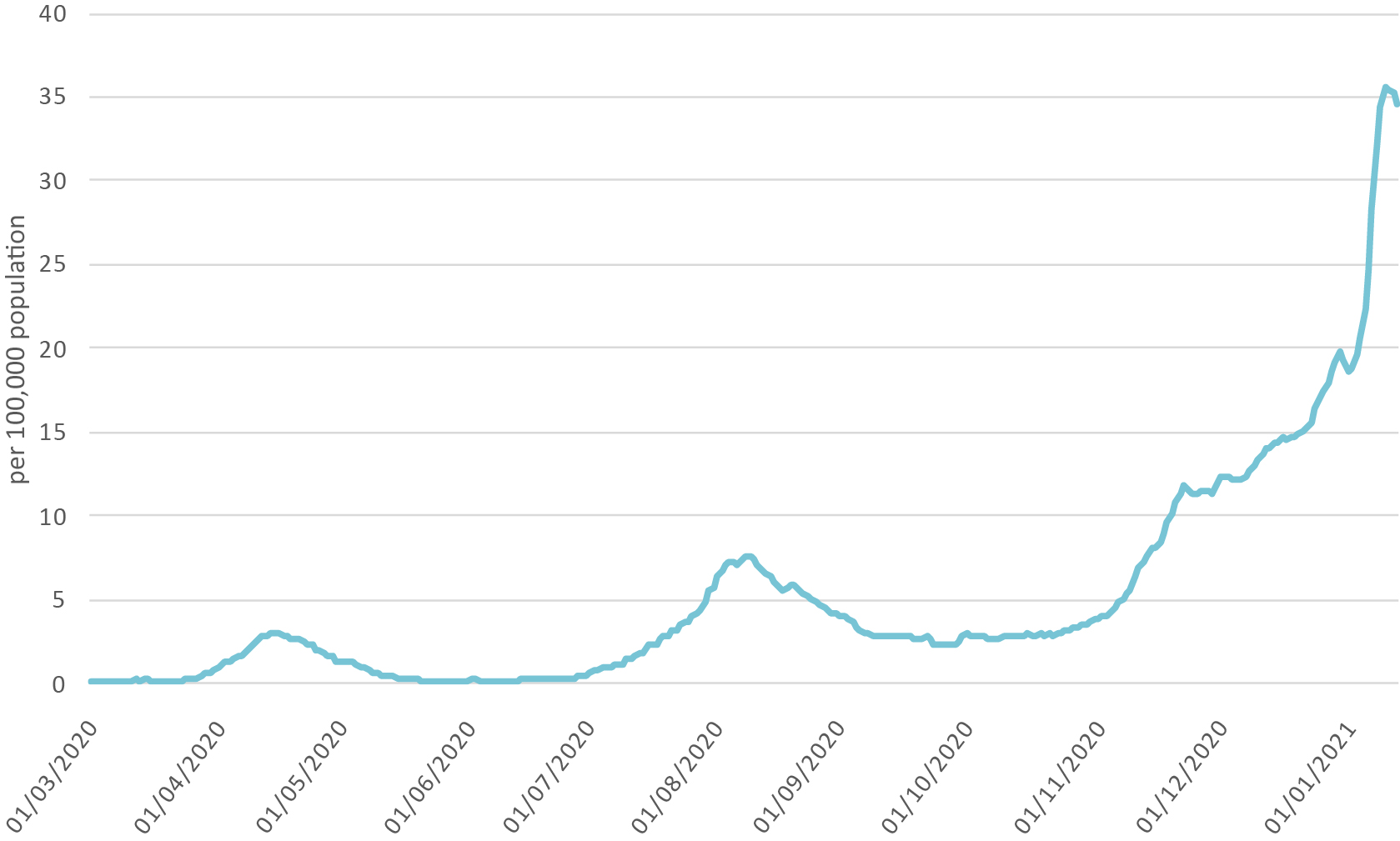 I became concerned that I would not be allowed to return to Japan, and I hence decided to cut my stay in Germany short and to fly back to Japan earlier than planned. The entry procedures had been further optimized in the meantime: I still had to take two corona tests, but the paper-based health screening was replaced by an electronic process during which a QR code was created that had to be presented at the health interview. All in all, I could pass immigration after about one hour from arriving at the terminal.

On Jan. 7, Japan declared a state of emergency in Tokyo, Kanagawa, Saitama and Chiba prefectures to contain the fast-spreading coronavirus. Germany further strengthened and extended the lockdown, but in contrast to the development in April 2020, infection rates stayed stubbornly high. Two-thirds of the German population supported the continued lockdown, although the restrictions of daily life had been fueling frustration and compliance was dwindling.

Just looking at the number of confirmed COVID-19 infections, which we quoted in this diary, hints to an exponential growth of the world-wide infections despite all measures of containment: 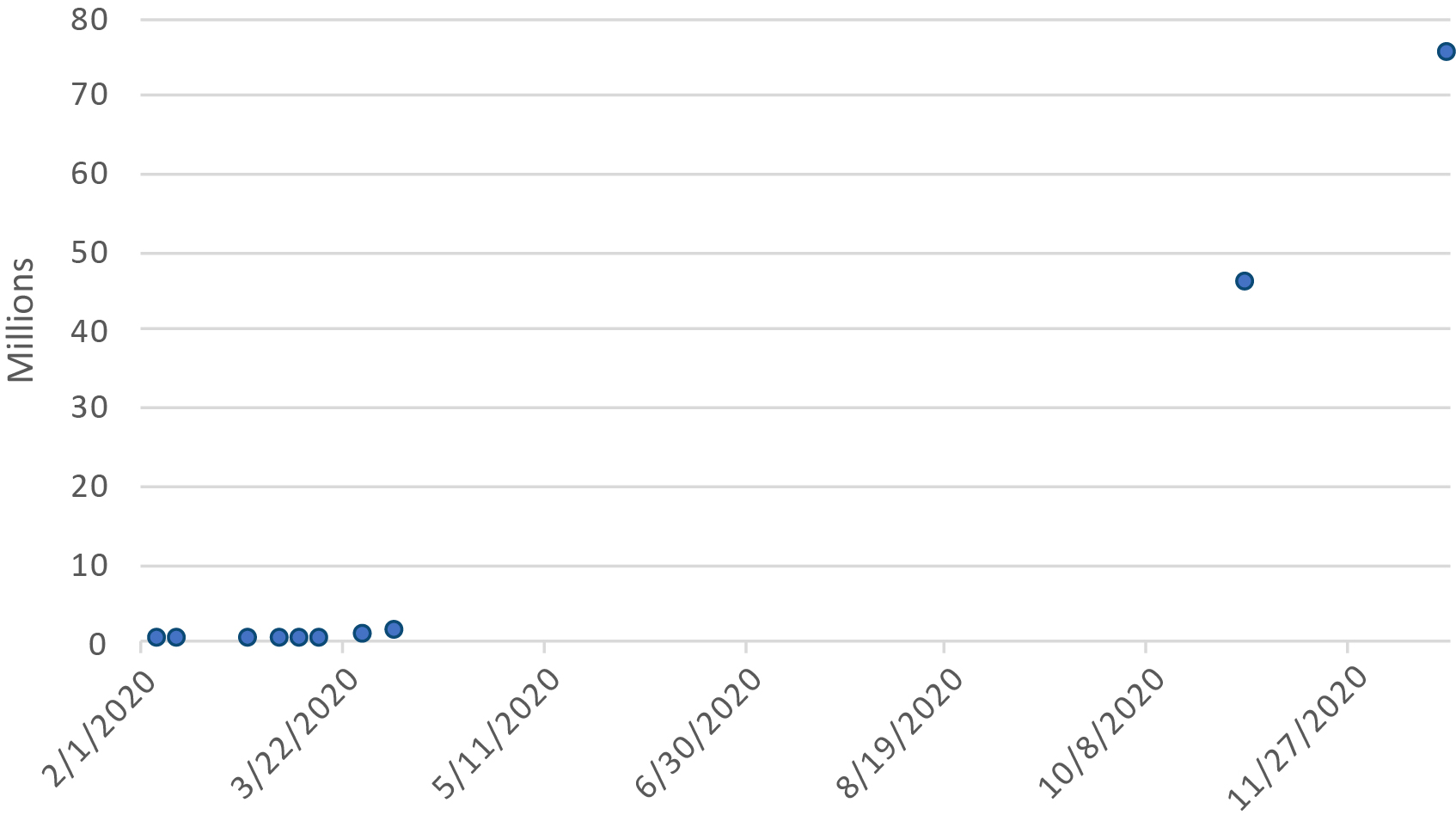 It appears that vaccination could be our only hope.

Jing Lang, FSA, FCIA, FLMI, is product manager for iptiQ, an insuretech by Swiss Re. She can be contacted at jing_lang@iptiq.com.

Dirk Nieder, FSA, is regional director, Gen Re, Life/ Health South East Asia and Japan. He can be contacted at nieder@genre.com.